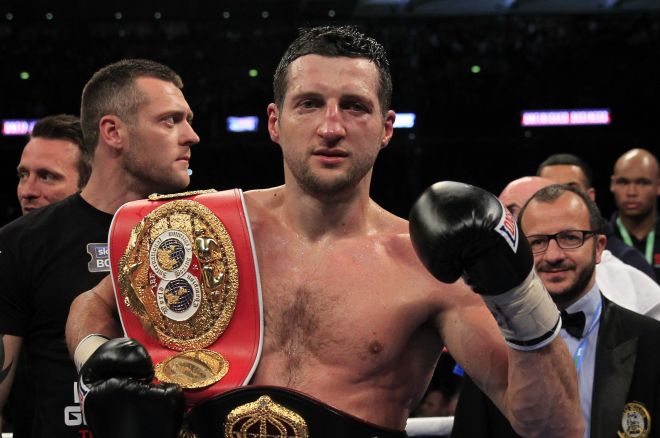 The Partypoker WPT500 at Dusk Till Dawn in Nottingham kicks off this Sunday, Nov. 9 at 16:00 GMT with the first of seven starting flights. The £500 buy-in event allows one reentry per day and already some big names have committed to playing including Nottingham boxing legend Carl “The Cobra” Froch, who will play the last-chance Day 1 turbo heat – which will feature 15-minute levels – that will take place at 12.00 GMT on Saturday, Nov. 15.

In addition, Froch will join forces with Team partypoker’s Mike Sexton for the traditional “shuffle up and deal.” Earlier this year Froch packed Wembley Stadium for one of the biggest fights in British boxing history, but now he’s set his sites on poker.

“To see a big World Poker Tour event come to my home city is great news for everybody in Nottingham – I hope we can pack Dusk Till Dawn like we did Wembley Stadium,” Froch said. “I’m not the most serious of poker players but with a £500 entry and the chance to win a share of at least £1 million this tournament is very accessible so I look forward to playing for partypoker. Make no mistake though, if you are at my table I want to knock you out! You never know if the poker goes well in Nottingham it could be time to take the big game to Vegas.”

The PokerNews Live Reporting Team will be on hand for the Main Event at Dusk Till Dawn, and players will be able to utilize our patented MyStack App which will allow them to directly update their chip counts in the PokerNews blog using their iPhone or Android phone.

“The World Poker Tour and Dusk Till Dawn are two of poker’s most premier, well-respected brands. Working with the powerful duo for the upcoming WPT festival in the UK couldn’t have PokerNews more excited,” said PokerNews Editor in Chief Donnie Peters. “PokerNews will be covering the WPT UK Main Event, and we look forward to seeing you there.”

Partypoker have qualified over 100 online players and are organizing plenty of off the felt fun for all players, which include a welcome party on Saturday November 15 at 21.00 GMT hosted by Spoony and Froch. There will also be daily pool tournaments hosted by ‘Mad’ Marty Wilson.

Finally, Partypoker did a special question and answer session with Froch where they talked about his approached to poker, fighting career, and more. You can read that piece over at the Partypoker Blog.