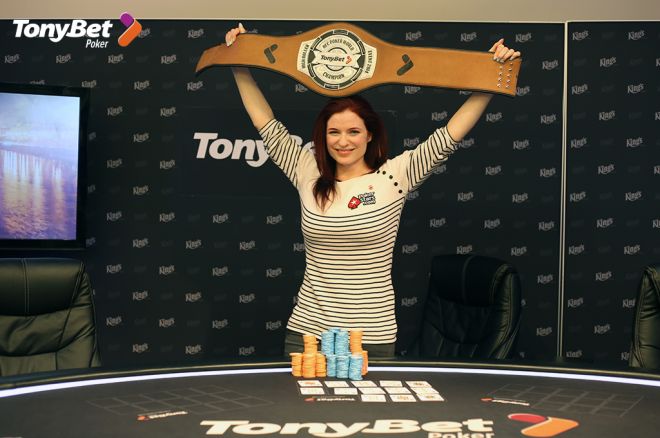 Philadelphia chess grandmaster Jennifer Shahade made history on Dec. 9, by winning the €10,000 Open-Face Chinese Poker World Championship High Roller organized by TonyBet Poker at King's Casino in Prague. Shahade walked away from the tournament room with the €100,000 top prize and the honors of bringing home the richest open-face Chinese (OFC) poker event in history.

The event attracted 23 players, generating a total prize pool of €218,500 — the largest ever registered in a live OFC poker event.

Jason Mercier, Sorel Mizzi, Alexander Kostritsyn, two-time World Series of Poker (WSOP) bracelet winner Rafi Amit, and eighteen other high rollers turned up for the first-ever live OFC poker World Championship €10,000 buy-in event, but none of them could outdo Shahade. The event, which was streamed live, not only broke the record in prize money, but in the number of viewers as well.

"This is huge," a representative from TonyBet told PokerNews right after the event. "The game of poker is changing right here, right now. This is our first live event, and it’s already the biggest in history. The number of entries has sent us to fantasy land. The event was bigger than any WSOP or European Poker Tour OFC poker event, and the players just loved it. The viewers loved it as well, as tens of thousands of OFC fans watched and interacted with the live broadcast and their responses were positive, to say the least."

The three-handed final table featured Shahade and two Russian players, Ilya Bulychev and Iakov Onuchin. In the end, it was the Shahade who proved to be the best.

"It was the biggest buy-in event I ever played, and I'm really happy I won," said Shahade right after earning the victory. "I loved it and had a great time. I almost busted several times, and I wasn't so happy with how I played in the beginning, but then as I got more tired, I got to play better. I have played regular open-face Chinese poker in a live tournament before, but never pineapple. It was fun. I thought it was great and hope there will be more tournaments like this."

She added, "I was definitely slower than other players in fantasy land, because I realize that even though it’s fantasy land, it’s very easy to make a mistake. I think people have this false sense of security because they’re in fantasy, and they think they’re not gonna make any errors, and I think it’s very wrong."

During the tournament, Shahade engaged in a long battle against the 2013 EPT Grand Final OFC event winner Jason Mercier. When asked about his game, she said that playing against Mercier was not easy.

"Jason Mercier is really good," said Shahade. "I played a lot against him during the event. I think he got tired at one or two instances where he might have made an error, but he’s obviously very strong."

The TonyBet Open-Face Chinese Poker World Championship continues today, Tuesday, at King’s Casino in Prague with the Day 1 of the €1,000 buy-in Main Event. Day 2 of the event will be live streamed on the TonyBet live poker blog. For more information about the event and the poker room, visit our page dedicated to TonyBet Poker.