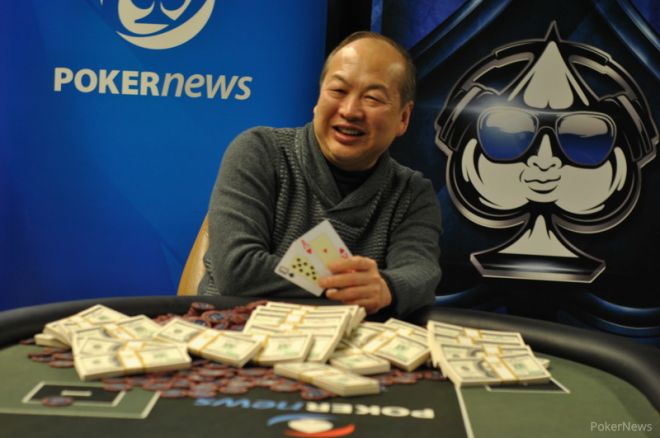 Season 5 of the Mid-States Poker Tour (MSPT) began way back in February at Running Aces Harness Park in Minnesota and saw Peixin Liu reach the final table. There, he busted fourth in a tournament ultimately won by Mark Sandness. The tour returned to its home state for the last stop of the season, and this time Liu finished on top claiming $106,483 for defeating a field of 432 at MSPT Canterbury Park. It was Liu's first MSPT title and the biggest live score of his poker career.

Ninety-three runners returned for Day 2 on Sunday to compete for the final MSPT trophy of the year, and 45 would be paid for their efforts. Plenty of notables failed to reach the money including Todd Breyfogle, Jon Hanner, Tony Hartmann, Matt Alexander, Adam Dahlin, Jeremy Dresch, and Kou Vang. By failing before the money, Vang fell just shy of the necessary points needed to overtake Mike Deis for MSPT Player of the Year.

The bubble burst in spectacular fashion when tournament veteran Everett Carlton bluffed off his stack to Day 1 chip leader Rodney Colson, jamming the river on an

. Colson took tank-called with the

, and his two pair was good.

Once the payouts began, players quickly began falling by the wayside. Dennis Stevermer, Aaron Johnson, Jeff Bryan, Ken Pates, Jeff Fielder, Matt Kirby, and Nick Pupillo were among the players scoring cashes on their ways out the door. When Tom Stambaugh was eliminated just after the start of Level 26 (20,000/40,000/5,000), the final table was set with Yevgeniy Minakrin in the lead with more than 2.1 million.

Colson, who was at one point the overwhelming leader in the early stages of Day 2, found himself out in 10th when he lost a race with

of Leo Fussy, rendering Fussy short, and he busted a short time later in fifth.

Things finally slowed down during four-handed play, as it took an hour and a half of battling over mostly small pots before Minakrin fell in fourth. He called off his last 14 big blinds with the

against a small blind shove from James Wilson, who had the

and held. Wilson did the deed once more to send John Reading packing in third. After a

and couldn't hold against Wilson's

as the latter hit a flush.

Liu and Wilson entered heads-up play very close to even, and they battled it out for an hour with Liu gaining the upper hand when he called Wilson's four-bet shove with the

and was against the

flop left Liu drawing thin to stay alive, but a

turn was what he needed to grab the chip lead. Liu got two streets of value with the

a short time later to increase his lead, and a

flop proved to be the final one of the year for the tour. Wilson shoved in with

, and Liu called with the

, holding when the board ran out with running kings.

With that, the 2014 MSPT season came to a close, crowning Liu as the final champion. The MSPT is done for the year, but Season 6 is coming up quick. It will kick off at a brand new stop — BestBet Jacksonville — on Jan. 15, 2015, with their $200,000 guarantee Main Event taking place from Jan. 23-25. For more information visit msptpoker.com.