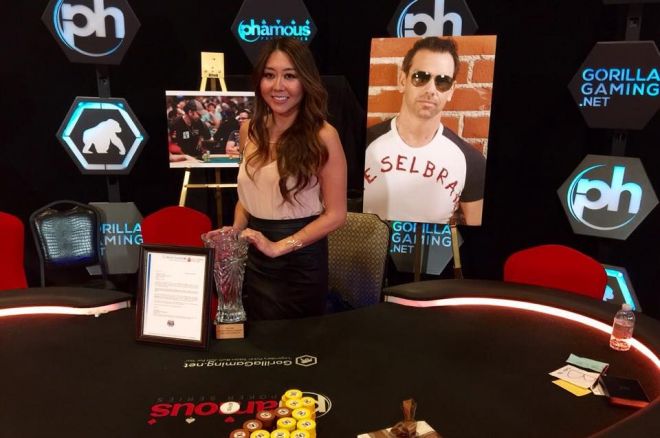 On Thursday night, Planet Hollywood was poker's hotspot as hundreds of pros, fans, and industry luminaries packed the mezzanine for the 2nd Annual Chad Brown Memorial Tournament, a part of the "Suck Out Sarcoma" campaign.

The event was put on in honor of beloved poker pro Chad Brown, who had passed away one year ago to the day after a three-year battle with cancer.

The event kicked off with a cocktail reception and silent auction, followed by a charity poker tournament held to benefit the T.J. Martell Foundation for Leukemia, Cancer & AIDS Research. The $240 buy-in tournament also offered $100 rebuys, and dozens of players took advantage in an attempt to raise as much money as possible for the charity.

Among those in attendance were Australian cricket star Shane Warne; Hollywood actress Jennifer Tilly; a long list of poker pros including Liv Boeree, Vanessa Selbst, Linda Johnson, Rep Porter, and Chris Moorman; and Maria Ho, who not only hosted the event, but ultimately won the charity tournament.

"I raised with pocket aces and Shane Warne decided to shove," Ho told PokerNews regarding her road to victory. "I think table dynamics and a game flow wise it was a great shove, I'd been raising all the time. I had the aces and he had ace-nine. I think I skyrocketed in chips from there. Honestly I ran so good, I'm not even gonna lie. It was a really stacked final table for a charity event. I knew every single person that was at the final."

As for the event itself, Ho rebought six times and even doled out $1,000 worth of rebuys to other players.

"There's been so much positive energy in the room today, and I can tell the whole poker community got behind this event in Chad Brown's honor," said Ho. "I just feel so grateful these are the people I get to interact with on a regular basis. They're so generous. I was nervous because I'd never hosted a charity event before, and I really wanted to right by the charity. I'm just beyond thrilled on how much everybody contributed today."

Here's what some others had to say about the night's affair:

"I heard last year it was much more of a somber mood as Chad had just passed, but I think this year everyone came together to celebrate his life," Ho concluded. "Jennifer Winter did such an amazing job [organizing it], she was definitely at the helm of this. She really did everything. I think everyone had a lot of fun."

For more on the 2nd Annual Chad Brown Memorial Tournament, check out Sarah Herring's video from the floor: