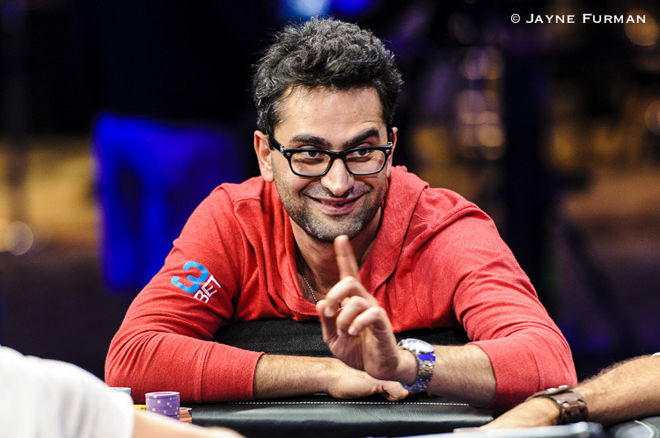 They played into the money and beyond on Day 3 of the 2016 World Series of Poker Main Event in Las Vegas on Thursday.

Now, just 800 players remain in the hunt for one of nine seats at the Main Event final table this November, and ultimately the title of World Champion and the $8 million first-place prize that comes with it.

All summer long, PokerNews.com will be bringing you daily coverage of the 2016 WSOP, brought to you by our sponsors, 888poker.

WSOP Veterans Emerge as Contenders in the Main Event

The 2016 Main Event's third day started with the survivors from three starting flights and separate Day 2s combining for the first time and eight-time WSOP Circuit ring winner Valentin Vornicu leading a 2,186-player field. Vornicu maintained the lead through the first part of the day and into the dinner break, joining European Poker Tour Barcelona winner Tom Middleton as the first players past the 1,000,000 chip mark.

The 1,012-player money bubble burst just after midnight, without the need for hand-for-hand play, as Adam Furgatch took bubble boy honors, winning a 2017 WSOP Main Event seat in the process.

"A famous player, I don't remember who, once said that the day you bust out of the Main Event is the saddest day of the year for a poker player," Furgatch told PokerNews. "So yes, it's sad, but I was so down on chips, to get anything, the experience of being the bubble boy, the difference between that and maybe going out a few hands later for an extra $5,000, the experience may be worth $5,000."

As the day wore on, leading up to the money bubble and past it, several players pushed up and over the 1,000,000 mark, building contending stacks. Montreal, Canada native Marc-Andre Ladouceur, who finished 63rd in the 2011 Main Event and a heartbreaking 13th the very next year, just missing out on the November Nine experience, was among them.

This time around, Ladouceur told PokerNews he's enjoying the experience and feeling confident he can make something special happen.

"I feel a lot more confident in my play than I was in 2012," Ladouceur said. "I mean, it was heartbreaking back then, and now I'm just glad to have some chips and hopefully make another deep run.

"I think the experience is going to help so much. This is a big moment for everybody here, as it should be, and it's still a big moment for me, but it is known territory. I know what I need to do, and not do, over the next four days. There is the play on the table, but there are also a lot of things off the table too. Eating, sleeping, if I was to make Day 7 I think I'd be a lot more ready, and a lot more composed than I was before. I think I'm more relaxed now. I enjoyed the moment back then too, but I think I have more fun now, and I'm very much looking forward to the next four days now, if I can make it. It would be amazing to have a chance at making a Day 7 again. To have a second shot at it would mean a lot."

2004 WSOP Main Event Champion Greg Raymer also built a contending stack on the day, and although he's not among the leaders heading into Day 4, he's also hoping experience will aid him in making a deep run again this year.

"It is so different now," Raymer said. "The players are so much better. The worst players now are significantly better than the worst players were back then. There used to be a lot of systematic errors that players made over and over again, and most of them avoid those errors in today's poker world. It's a lot harder to build that big stack, at least much harder than it used to be. You have to play good and run good every time. It used to be you could just play good and not run bad to build a big stack in an event like this.

"But when you talk about reading tells and things like that, they come from a place of emotion. When people are feeling emotional they are much more likely to exhibit a tell. Because I've been there and done that, it's not going to cause that kind of emotion in me."

Raymer said experience helps him avoid tilt when things go wrong and avoid getting over excited when they go right.

"Even some of these younger guys who are really great players, if they are deep in the Main Event for the first time, they are going to start showing some of these emotions in these big pots. That's where experienced players like myself can have an advantage."

Play will resume at 12 p.m. local time Saturday with each of the remaining players guaranteed at least $16,007.

The Little One Doubles Up

The last WSOP tournament outside of the Main Event continued Thursday with the third and final starting flight for the $1,111 Little One for One Drop.

It appears a little over 800 survivors from all three starting flights will come back for Day 2 at 2 p.m. local time Friday with the money bubble in sight.