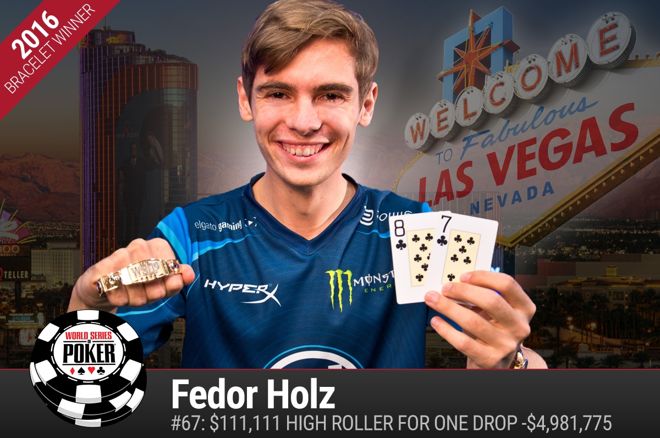 Fedor Holz had accomplished basically everything there was to accomplish in tournament poker, having piled up millions in online and live winnings. The one thing missing was a World Series of Poker bracelet, which he checked off the list by winning the $111,111 High Roller for One Drop in Las Vegas on Sunday.

The young German claimed $4,981,775 for topping the 183-player field, the biggest cash in a career that's already seen a number of seven-figure scores.

“Normally, I'm good with words, but this time, I don't really know what to say,” he said. “I just feel so overwhelmed. I just feel in heaven right now.”

Holz has a history of success in high roller events that's second to none. Already in 2016, he had over $9 million in cashes coming into the High Roller for One Drop. He won the $200,000 Triton Super High Roller in the Philippines for $3.4 million, came second to countryman Rainer Kempe in the$300,000 Super High Roller Bowl for $3.5 million, and put together an incredible run with four wins or chops in the ARIA High Roller series for about $1.7 million this summer.

Given all that, it's little surprise to find Holz's name at the top of yet another nosebleed tournament. He came into the event laser-focused, telling friends it was going to be an important week and he had “an intense feeling” about this tournament.

However, for much of the final table, it was another player seeking his first bracelet, American Dan Smith, who looked poised to capture gold for the first time. Smith held the chip lead for the early portion of the final table, but things changed in a huge three-hand stretch with six players left.

flopped. Under-the-gun limper Jack Salter fired a bet, Holz called, and McKeehen shoved all in with

. However, he had been coolered, as Holz held

and snap-called when Salter folded.

The next hand, Holz shoved all in from the cutoff to put the players behind him at risk. Brian Green called it off with

and was dominating Holz's

left the Texan drawing dead after the turn, however.

The very next hand, Holz again shoved all in with a dead button on his left, and Salter called in the small blind with

. Holz was again in need of major help as he had

, but a king-high flop and then running hearts put almost every out he had on the board.

“I just ran like a god,” Holz said of the fiery stretch.

river and Holz shoved for just under 19 million. Smith called after tanking a few minutes, removing his glasses, and burying his head in both hands.

and won with trips against Smith's

That gave Holz the chips and the momentum he needed to win the match, finally sealing the deal when fortune smiled upon him again with

all in before the flop.

Holz might be widely considered one of the best, if not the very best, no-limit hold'em tournament players on the planet, but that sort of good fortune has undoubtedly played a role in his massive success.

“I know I'm just on a heater that will probably just happen once to me,” he said. “I just try to appreciate it and enjoy my time while it lasts.”

How long that time will be is an open question, as Holz's enthusiasm to grind out countless hours at the felt appears to be waning in the wake of his brilliant run. In a recent interview with PokerNews, he said he didn't expect to put in another high-volume summer like this one.

After taking down the biggest tournament of his illustrious career, that's a sentiment the German echoed even more strongly.

“I think it makes it even more likely to be honest,” he said when asked if his mindset was changed at all. “I think now it's time to take a break and re-orientate.”