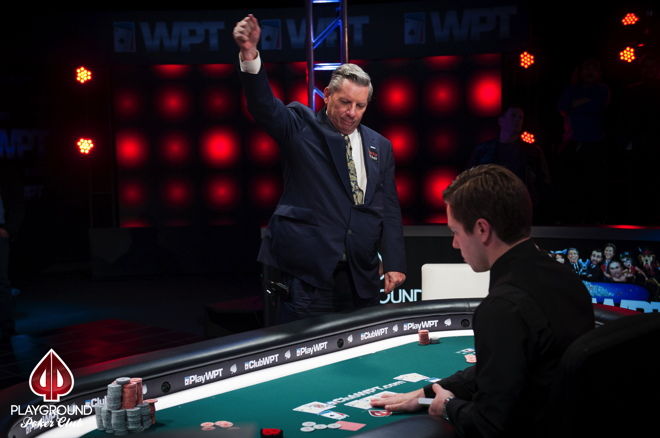 Finally, one of the only things missing from the illustrious career of Mike Sexton has been crossed off the list. In the wee hours of Friday morning inside Playground Poker Club, Sexton defeated his final opponent in a field of 648 players strong to claim his first World Poker Tour (WPT) title at WPT Montreal.

For 15 years, Sexton has been the face and voice of the WPT. Few have done more for the game of poker. He was inducted into the Poker Hall of Fame in 2009. Entering play on Thursday leading the final six players in chips, Sexton was the heavy favorite.

Jake Schwartz was also trying to make good on another WPT final table appearance. Soon after getting stung by Benny Chen, Schwartz made a move on the small blind of an unopened pot and ran into Nadir Lalji’s ace-king. Schwartz tabled jack-nine and could not improve, falling in sixth place for CAD $81,740.

A lot of attention was directed towards Ema Zajmovic, who started the day second in chips but could make history as the first female to ever win an open WPT title. A few hiccups cost Zajmovic a big portion of her stack and then she ran into pocket aces twice.

First, Zajmovic doubled up Chen. Zajmovic three-bet Chen’s open with ace-king only to have him four-bet shove. Zajmovic called and Chen’s aces held. Not long after, Zajmovic three-bet shoved on Sexton only to find him snap-call with two aces. This time Zajmovic had king-queen, and after getting no help from the board, was eliminated in fifth place earning her biggest live cash of CAD $102,010.

A tricky limp, blind versus blind by Chen, induced a big blind shove by Ilan Boujenah. Unfortunately, Chen had pocket aces again, and snap-called, putting Boujenah at risk. Boujenah was in trouble holding two sixes and Chen'a aces held to send Boujenah to the rail in fourth place for CAD $132,750.

On the 106th hand, Sexton opened only to see a three-bet shove by Lalji. Sexton would make the call and the two were off to the races. Lalji tabled ace-queen, just slightly behind Sexton’s pocket eights. An eight landed right in the door as Sexton flopped a set and faded the turn and river to set up a heads-up battle with Chen. Lalji received CAD $183,320 for his efforts.

Chen started heads-up play with a slight chip lead but quickly took control, out-chipping Sexton by more than 10-1 at one point. Sexton staved off elimination, coming from behind in multiple all-in pots to keep his dream alive. The poker gods must have had their eye on Sexton as well as the two battled for more than 150 hands. Chen played incredibly, but nothing was going to stop Sexton.

On hand #264, the 158th hand of heads-up, Sexton sealed the deal. Retaking the chip lead just moments before, Sexton sat in the big blind. The stacks were ridiculously shallow, only 30 big blinds in play. Chen looked down at king-jack and announced he was all in. Sexton peeled his cards, finding two queens and quickly made the call. A queen was delivered on the flop giving Sexton a set, and though Chen had picked up outs to a straight, Sexton faded and history was made.