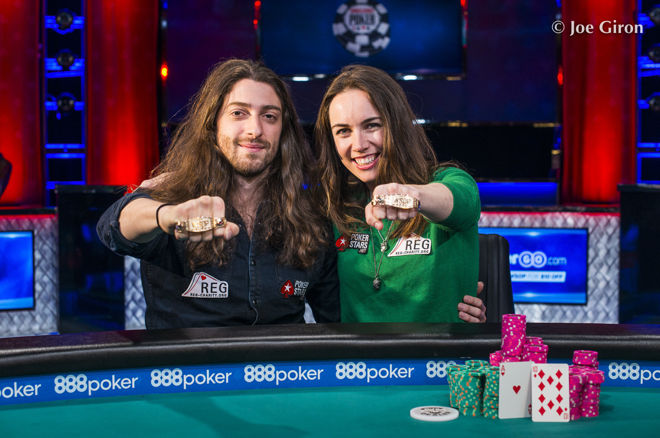 After three days of play, one of poker's power couples were crowned champions in the inaugural $10,000 No-Limit Hold'Em Tag Team Championship. Igor Kurganov and Liv Boeree bested a field of 102 teams to win the first-place prize of $273,964.

The runner-ups in this event were the team of Ankush Mandavia and Joe Kuether. They finished just shy of the championship but take home $169,323 for their efforts.

Daniel Negreanu's team, made up of Eric Wasserson, Mark Gregorich and David Benyamine, entered Day 3 with the chip lead. However, Negreanu wasn't able to capitalize on the opportunity to win his seventh WSOP bracelet as the team bowed out in third place.

When asked how it felt to get the win, Boeree responded with, "My mind is blown."

Added Kurganov, "The money is nice, but for me it's winning the bracelets together that matters the most when comparing the ratio of people that are happy from the cash to having the hardware."

Both players were surrounded by a massive group of friends during their winner photos and that just goes to show how well respected and liked they are within the professional community. Boeree and Kurganov said they will be donating 50% of their winnings to the Raising for Effective Giving (REG) charity.

The unofficial final table of 10 came together late on Day 2 after the elimination of Team Senovio Ramirez - Juan Ramirez - Matthew Lapossie. They got their remaining chips in the middle with king-jack but ran into pocket queens of Team Martin Jacobson - Mark Radoja.

Team Paul Snead - Michael Newman - Charlemagne Benjamin came in with the third-shortest stack and were unable to spin their chips up, getting eliminated in 10th place ($17,912) after Snead got it in with pocket aces against Negreanu's kings, and the dealer peeled a king on the turn to end their run.

The official final table of nine began, and in just the sixth hand, Team Dietrich Fast - Moritz Dietrich - Jan Schwippert moved all in with pocket sevens, but they were no match for McClain's ace-six suited after they spiked an ace on the turn. The team took home $22,156 for their efforts in ninth place.

Just four short hands later, Team Connor Drinan - Mike Aron woke up to ace-queen in the small blind but ran into McClain's pocket kings and had to settle for an eighth place finish for $27,967.

An hour of play went on, and the next to go was Team J.C. Tran - Nam Le - Antonio Gutierrez. The trio shoved on the button with two black sevens and raced off with McClain's king-queen off suit. The board ran out with four hearts, and the king of hearts was good enough to send the team home in seventh place for $36,008.

they will be donating 50% of their winnings to the Raising for Effective Giving (REG) charity.

Play continued on for a while until Day 2 came to an end. The remaining six players bagged their chips and came back for Day 3 on Friday. Team Daniel Negreanu bagged the chip lead, with Team Javier Gomez - Lander Lijo coming in with the shortest stack.

A little more than 30 hands went by before Team Martin Jacobson - Mark Radoja hit the rail. Radoja flopped a pair of sixes, but it was no match for Kurganov's pocket eights and his team had to settle for a payout of $47,271 for sixth place as the first elimination of the day.

Next to go in fifth place ($63,253) was Team Javier Gomez - Lander Lijo. They came in as the shortest stack, but managed to ladder up a spot. Gomez got it in with ace-ten suited but couldn't win a flip versus Negreanu's pocket nines.

Fourth place belonged to Team Anthony Ajlouny - David Fong - Mike McClain. They battled hard, but in the end they were coolered when running bottom set into top set, earning themselves a payday worth $86,237.

Three-handed play lasted over 40 hands, after which time Team Negreanu got its chips in the middle with top pair and a straight draw against Kurganov's two pair and flush draw. The river was no help and Negreanu and team hit the rail in third place for $119,753.

Heads-up play lasted 90 hands between Kurganov and Mandavia. They swapped the chip lead several times, with Kurganov holding the lead for a good chunk of time. Eventually, Mandavia found himself on the wrong end of a cooler, running the second-nut straight into the nuts. Mandavia and Kuether finished as the runners up, and Kurganov and Boeree earned their first career gold bracelets.

Earlier on the final table, Sarah Herring caught up with Liv Boeree: