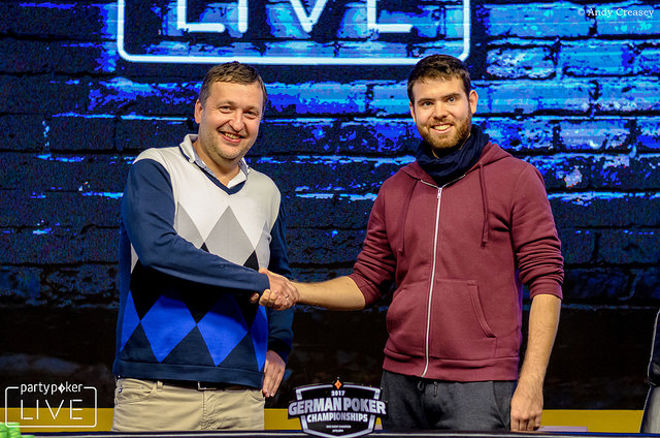 Some of poker's new young guns went to battle with the old guard in the 2017 partypokerLIVE German Poker Championship Super High Roller over the weekend. A total of 28 entries put down the €25,000 buy-in at King's Casino over the weekend created a top prize of €350,000, with only the top three getting paid.

By Sunday evening, only Jack Sinclair and Tony G remained, and the two agreed on a deal that saw Tony G take €300,000, while Sinclair secured €240,000. They left €10,000 and the trophy left to play for. Sinclair fought his way to a small chip lead and it was all over when his

got there versus Tony G's

. After apologetically sprawling over the felt, Sinclair pulled himself together and shook Tony's hand, before lifting the trophy as his rail joined him for the winner's photo.

This result, along with the €30,000 he picked up from his fourth place finish in the High Roller at the start of the festival, will nicely supplement Sinclair's success in the World Series of Poker Main Event last month where he finished eighth for $1.2 million. He's shaping up to have quite the year on the circuit, and is understandably stoked to have beaten such a big name as Tony G in such a prestigious event. Sinclair told PokerNews that will be seeing him at the next partypokerLIVE event, the $5M guaranteed MILLIONS Russia, held at Sochi Casino and Resort starting Sept. 9.

Sinclair entered Day 2 in third position on the leaderboard. Late registration closed two levels into the second day to bring the total to 28 entrants. Sinclair held the helm steady throughout Day 2, as the field quickly thinned down to the final nine.

At one point during the final table, Sinclair was bottom of the pile, but never looked at risk. After doubling through Yair Bitoun with the nut flush against a set, Sinclair never looked back, taking big pots off the big names until there were just four left. The last four seemed equally matched for a long time until Tony G picked off Bertrand 'ElkY' Grospellier and Steffen Sontheimer in quick succession;

On the money bubble, Grospellier picked a bad time to shove blind on blind, running into Tony G who found

in the big blind. Grospellier's

was drawing slim, and didn't pick up any help on the

turn gave Grospellier a gutshot straight draw, but he ultimately bricked on the

river, and shipped chips over to Tony G.

, and he was in great shape to double through Tony G's

. Tony G paired up on the

flop, but Sontheimer picked up a gutshout straight draw and backdoor flush draw to go with his pair outs. The

on the turn was no help, and the

on the river in fact gave Tony G the straight, as he knocked Sontheimer out in third.

Tony G and Sinclair agreed to the chop, and then 30 minutes later the Englishman rivered the three-outer to put an end to the tournament. While Tony G walked away with the bigger share of the prize pool, it was Sinclair who posed for the winner shot with the trophy.