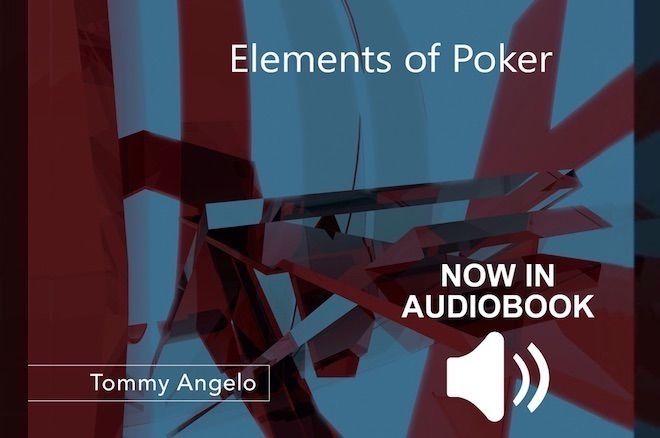 Tommy Angelo's 2007 Elements of Poker is already a classic. After decades of experience as a player and a coach, Angelo identified 144 of poker's "elements" — stuff like A-Game, Tilt, Bankroll, Position, Running Good and Running Bad, Awareness, and much more. Witty and wise, stern and compassionate, Angelo's book is a reassuring guide for a challenging game.

Angelo recently revised and narrated an audiobook version of Elements. At seven hours and seventeen minutes, there's plenty of valuable material to (re)discover. Despite the absence of conceptual charts and illustrations — all available on his website — the audiobook is as accessible and relevant as ever.

As Angelo's readers already well know, Elements of Poker is less about playing poker than about how to be a poker player.

Larry Phillips's Zen and the Art of Poker, Jared Tendler's The Mental Game of Poker, Fedor Holz's Primed Mind app, Elliot Roe's The Mindset Advantage podcast — these are only a few resources within a vast area called "the mental game." In a way, Tommy Angelo is the mental game's kindly godfather. He's indispensable. And so is his concept of reciprocality.

Here's an example of a reciprocal analysis. Someone raises under the gun, and you reraise from the big blind with two aces. Your opponent reraises. You shove. Your opponent calls with two queens, and you win a big pot. Now that this hypothetical hand is over, trade places with your opponent. Imagine how you'd play two queens in his position. Imagine how he'd play two aces in your position. Then compare the imagined result to what actually happened, and you'll a sense of who really won the hand, in theory.

The ultimate goal is to slay tilt, play painless poker, and achieve a condition that Angelo calls "bliscipline" — namely, "when you are at the table and you are so totally in control of yourself and so totally at peace in the situation that no matter what happens next, you'll still have plenty of resolve in reserve.

You're at the showdown. Action is on the big blind to either show or muck his hand. But he does neither. What should you do?

"When a player hesitates during his turn at the showdown," Angelo says, "it creates a space that exists outside the natural order of things, and therefore outside the rules. This is where the fastroll lives, in the land of ethics and etiquette, where the floorman has no jurisdiction."

The fastroll — when a player shows his hand out of turn on purpose — is a courtesy. It's never wrong to fastroll. In certain situations, though, it can be deemed to be very wrong not to fastroll. But when? It depends.

Instead of giving firm "answers," Angelo offers tentative advice. He accepts that poker, like life, is filled with unknowing. "The main thing to realize," Angelo says, "is that no matter how good you get, you will always have a gray area. The gray is not part of you. It is part of the game."

At first, Angelo posted from behind the button. He often found himself aggressively raising or reraising in order pressure out-of-position players or to make the blinds fold. "Here I am reraising before the flop," Angelo says, "with some hand that I would have mucked without a memory had I not posted behind the button. When instead, I could have been sitting there in the blinds, comfortably cultivating a snug image that I would exploit later."

Always thoughtful and attentive, Angelo considers other at-the-table topics as well such as when to chop, when to quit, when to seat change, how to check, how to shuffle chips, and even how to move chips from one seat to another. He also considers where to play, when to move up in stakes, how much cash to bring to the casino (your "pocket bankroll"), and when to go pro. Nothing, it seems, escapes Angelo's consideration.

Action folds to you in the hijack, and — wait a minute. Why is the hijack called "the hijack"? (It's another Tommyism, by the way.)

Okay, so you have eight-six suited in the hijack. What should you do?

With Element #111, Angelo presents the Universal Starting-Hand Chart, with which "you can work on your A-game and your C-game at the same time," Angelo says. "By asking yourself where you should draw your starting-hand lines, you refine your A-game. And by deciding to fold certain hands in certain situations no matter what, you raise your C-level."

Certain fundamentals, like a structured thought process or the value of position, never change. "Acting last is like taking a drink of water," Angelo says elsewhere. "We don't have to understand why it's good for us to know that it is. And the benefits are unaffected by our understanding of them."

Position is so important that, for Angelo, it becomes one of two major characters in the book. With each appearance, readers come to appreciate position's charms and its value.

The other major character in Elements of Poker? "It's you," Angelo says. "It's your individualism, and your path of poker from weak to strong, from fearful to fearless. This book is about trusting yourself and becoming your own player."

Elements of Poker is newly available in audiobook form for Amazon, iTunes, or Audible. Learn more about EOP at Tommy Angelo’s website.

PokerNews Book Review: 'From Vietnam to Vegas' by Qui Nguyen and Steve Blay