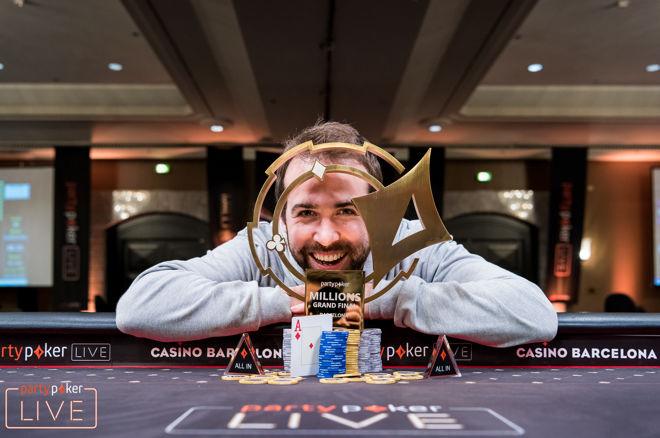 The record-setting 2018 partypoker LIVE MILLIONS Grand Final Barcelona €10,300 Main Event has crowned a champion. Pascal Lefrancois was the one to lift the trophy for a career-best score of €1,700,000. It was the biggest prize thus far to be awarded in a poker tournament at the Casino Barcelona.

Lefrancois was cheered on by a loud French-Canadian rail, while the other side of the table featured plenty of loud chants from the mostly British supporters throughout the final table.

Lefrancois: "I just ran so good for three days straight, it's amazing, it's a good feeling."

“It has been exhausting, an exhausting four days especially with the two flights on Day 1. I tried to keep my focus even though I was pretty tired. It is really sick,” 31-year-old Lefrancois from Montreal said, almost lost for words. “You see these events, and you just don't think you can win.”

Lefrancois held the chip lead at the end of Day 2 and also came into the final table as the chip leader, but it wasn't an easy ride by any means. “I had a rough start, not picking up any hands. But one level I just ran super good, and I could hold onto that lead. I just ran so good for three days straight, it's amazing, it's a good feeling."

For Adam Owen, it was a return to the place of his biggest success at the poker tables thus far. While being deemed to be a mixed game specialist, the biggest cash of his career thus far came in the EPT Main Event in Casino Barcelona where he eventually finised in third for €646,250. Owen more than doubled that payday with his runner-up finish in this event, taking home €1,300,000.

“I am an underdog. The players on this table are the best in the world, but I have the best rail in the world,” Owen said before heads-up play got underway. He certainly put up a show with a lot of moves and aggression.

As outlined by partypoker chairman Mike Sexton during his stint in the commentary booth, “Seven-figure paydays don't come by in the poker world that often,” and the top three were ensured of just that in the 1,175-entry strong field, which comfortably surpassed the initial guarantee and generated a prize pool of €11,397,500.

The third player to win a seven-figure score already knew what that feels like from just a few days ago. Stephen Chidwick finished runner-up in the €101,000 Super High Roller to record his best result in an already stellar poker career.

"I just try to think about the cards and the decisions, not about the outcome," Chidwick said with a smile on his face in the interview after his elimination and thanked his whole family and especially his granddad. “I want to dedicate it to my granddad, who is probably the biggest gamer in my family. If I hadn't grown up playing card games and board games, and even video games with him, then I maybe wouldn't be here now.”

Chidwick: "I want to dedicate it to my granddad, who is probably the biggest gamer in my family."

With big pay jumps right away, the tension was quite high, and it came as no surprise to see no casualty in the first two hours of play.

Boivin was sporting the famous “disco jacket” that was first introduced by his countryman Michael Gathy and worn on big final tables by Gathy, Terry Schumacher (Aussie Millions Six-Max Event in 2017), and his brother Johan (final table Aussie Millions Main Event 2018), as well as Heidi May (winner WSOP Ladies Event). The Belgian became the first casualty of the final table after more than 4 hours of play. Short in chips, he moved all in with ace-three suited and Stephen Chidwick called with pocket jacks and remained ahead.

Only a few minutes later, the second player that was flying the Belgian flag in the final was sent to the rail. Triple Crown champion Davidi Kitai, who had already won the €25,500 Super High Roller II for €700,000, added another €325,000 to his poker bankroll. The expecting father was supported by a big rail that also included his wife Caroline. Kitai ended up second-best with ace-jack against the ace-four of Diogo Veiga. More than one million in cashes during the only two events he played in the record-setting festival in Barcelona cap a very successful start to the year.

Diogo Veiga departed in 6th place after his flopped two pair with ace-trey was counterfitted by Stephen Chidwick's ace-nine suited thanks to running jacks.

“Adam's gonna win,” his rail started chanting even when their favorite was among the shorter stacks, and the Brit gained a lot of momentum when he won a flip with pocket sevens against the ace-nine suited of Jan-Eric Schwippert.

Down to the last four players, former dominating big stacks Stephen Chidwick and Dominik Nitsche were sent to the bottom of the counts. Nitsche was the first to fall when his jam with king-six was called by Pascal Lefrancois with king-trey. The Canadian improved to a runner-runner straight and also took care of Chidwick soon after. Chidwick was all in with ace-seven, and Lefrancois called with king-ten suited only to immediately spike a king on the flop.

Heads-up started with a commanding lead for Lefrancois, but Owen's immense aggression turned things around rather quickly. It wasn't enough, though, for Owen. Eventually, the duo both picked up suited aces and Owen four-bet all in with ace-ten. Lefrancois called with ace-jack, and the kicker played to crown the Main Event champion.

The festival had nine major events that all came with a seven-figure guaranteed prize pool for €23,000,000 in total. The who is who of the international poker circuit headed to one of Europe's major poker destinations.

In the various live satellites at Casino Barcelona, another €2.25 million was generated to bring the entire prizes at the festival to more than €30 million. Below you can find a chart with a summary of the nine major tournaments of the final partypoker LIVE MILLIONS stop in Season 1.

This marks the end of Season 1 for the partypoker LIVE MILLIONS tour. However, the Playground Poker Club in Montreal will host the first edition of Season Two in just a few days time, and Lefrancois will be back in action to take another shot at glory on home soil.