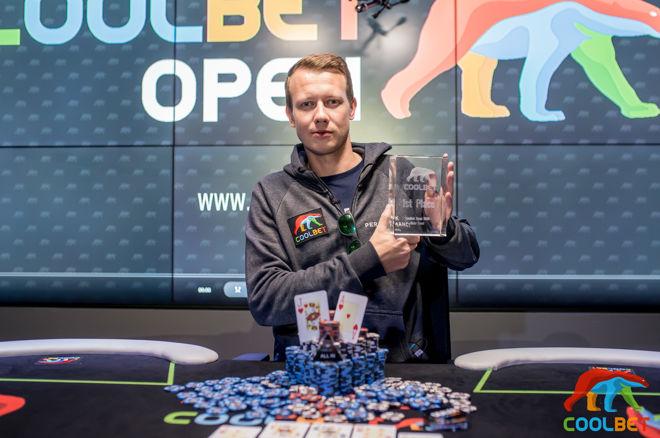 Finland's Sebastian Wahl outlasted a field of 425 entrants to win the first-ever Coolbet €550 Main Event at Olympic Park Casino and the Hilton Tallinn Park in Tallinn for €50,100.

In addition to the top prize, Wahl walks away with a Coolbet Open package valued at €1,200 for the next festival in Tallinn. That event will take place in October. The packages were added to the prize pool by Coolbet and handed out to all final table participants as well as a Las Vegas package for two valued at €5,000 added for the winner.

The win is the biggest thus far for Wahl, who after the tournament was over, celebrated with friends and the runner-up Sander van Wesemael.

The inaugural Coolbet Open festival was a huge success, especially regarding the attendance which far exceeded expectations in both side events and the Main Event. The 425 entrants generated a massive €206,125 prize pool. Also, the festival featured 26 side-events to create an action-packed 27 event schedule.

The second day ended when the money bubble bursted with each player guaranteed to take home €1,155. Estonia's Ave Lepik finished in 40th place to bubble the tournament when her ace-king didn't out flip the pocket jacks held by countrymate Jaagup Luhakooder. Lepik didn't go home empty-handed as Coolbet added a ticket to the next Coolbet Open €550 Main Event in October for the player that bubbled the tournament.

The final table began after Finland's Thanh Doan finished in tenth place for €3,650 after his ace-king couldn't win from his opponent's pocket tens.

When play resumed after the dinner break, it was Van Wesemael holding a minor chip lead over Kyosti Isberg with Wahl sitting comfortably in fourth place.

United Kingdom's Craig Timmis was the first casualty at the final table in ninth place for €4,200 after his pocket fives proved to be no match for Wahl's pocket kings. Norway's Espen Vaksdal bowed out soon after; finishing in eighth place for €4,900 when his pocket sevens couldn't catch up to Van Wesemaul's pocket tens.

After that, the chip lead bounced over to Norway's Kristoffer Skolem before it was relinquished to Wahl and eventually local Estonian player Jaagup Luhakooder.

Skolem took out Finland's Niko Mykkänen in seventh place for €6,100 after his pocket fives out-flipped his opponent's ace-king. Not too much later, Jan-Mikael Kesanen hit the rail in sixth place for €8,500 when he three-bet jammed a short stack with king-jack suited and couldn't hold after Wahl called with queen-jack suited.

Skolem suffered a colossal cooler when his pocket queens ran up against Wahl's pocket kings to leave him with scraps. Skolem collected the fifth-place prize of €12,100 after he jammed a short-stack with ace-seven suited and didn't hold against Luhakooder's queen-ten suited.

Finland's Kyosti Isberg picked a bad spot to bluff on the river against Wahl and walked away with the fourth-place prize of €15,300. After this hand, Wahl had the chip lead and never relinquished it. Luhakooder attempted to win a massive pot by making a hero call with ace-high but instead bowed out in third place for €20,500 when Wahl turned over a flush.

Van Wesemael called a four-bet jam from his opponent with pocket nines and was racing against ace-jack. A jack hit the flop, and the turn and Van Wesemael was never able to catch up to see him get eliminated in second place for €33,000.

After some celebrations, both the runner-up Van Wesemael and the winner Wahl appeared together on a PokerNews video interview on Facebook: