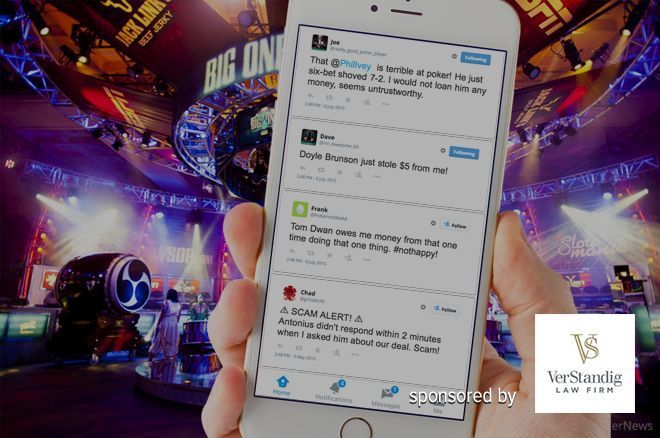 A healthy plurality of poker disputes cross the inbox of Molly Mossey or myself, often a touch too late for any preventative intervention and just in time for an intensive triage. The spectrum they run is wider than the column inches afforded this missive, and we long ago eclipsed the cliché threshold of ceasing to be genuinely surprised by much of anything. To each incident, I generally owe a duty of confidentiality, which is sacrosanct. But general trend lines are far from privileged in nature, and over the past few years, one particular legal problem has steadily risen from being an anecdotal oddity to a borderline epidemic: defamation.

over the past few years, one particular legal problem has steadily risen from being an anecdotal oddity to a borderline epidemic: defamation.

Fifty states have fifty sets of laws, and it is a gross oversimplification to conflate them all into a singular standard. But as a rough concept, people cannot make false statements about others without risking a judicial rendezvous. In some contexts, slander is only forbade if the speaker knows of the underlying falsity; in other contexts, negligently speculative fodder can be just as problematic. At least one state (with a very large poker community) regards defamation as a crime; in most pockets of the country, it is merely grounds for a civil lawsuit.

Nowhere, however, is libel a form of speech protected by the First Amendment; the majority of sweeping “it’s a free country” protestations to the contrary are borne of a peculiar blend of naivete and defensive spite. And while many of us giggled our way through an 11th grade US history reading assignment about the time Hustler magazine called into question the fidelity and premarital chastity of a certain televangelist’s mother, relying on the constitutional protections afforded parody, outside the pages of the Onion, is about as prudent as relying on a runner/runner combination to garner a chop.

Worse, it does not seem overly difficult to pinpoint a correlative cause for the uptick in defamation spats in the poker community, and it is one unlikely to yield anytime soon: with the rise of Twitter and Facebook, obnoxious exaggerations once shared only with those in earshot, are now hyper-syndicated from Monaco to Macau, and all points between, in a matter of milliseconds. That people can so easily bang out 280 characters before coming off tilt most certainly does not help the problem.

with the rise of Twitter and Facebook, obnoxious exaggerations once shared only with those in earshot, are now hyper-syndicated from Monaco to Macau

And just to further deepen the issue, the poker community is largely immune to one of the core legal safeguards meant to deter people from bringing their defamatory actions to court: damages. Indeed, while an average citizen may be rightfully peeved by a counterfactual rumor that his mother still picks out his work outfits every day, he will have a difficult time showing a judge how he has been financially harmed by hushed snickering about his pink overalls. But in an era of staking, coaching, and absurdly arrogant self-brand awareness, any untruthful assertion about a poker player’s integrity, navigation of the game, bankroll, or even winning hand, can have genuine economic – and, thus, civilly actionable – consequences.

So as poker sleepaway camp draws to a close and much of the Rio’s temporary population returns to their homes near and far, a few tips to help ensure your circuit schedule is not interrupted by depositions:

Finally, with this drawing to a close my weekly WSOP Insights columns for 2018, one last shameless plug: When in doubt, call a lawyer.

I’ve edited blog posts, YouTube videos, Tweets, Facebook posts, and any number of other items for poker clients, with an eye toward preemptively ensuring a tirade not beget a lawsuit. And as a proud member of the poker community who very much wants to see it – and all its members – thrive, I would rather nip and tuck unpublished rants twenty more times in the coming year than have another twenty summonses hit my desk before my Twitter feed is again overrun by people ordering walberry shakes.