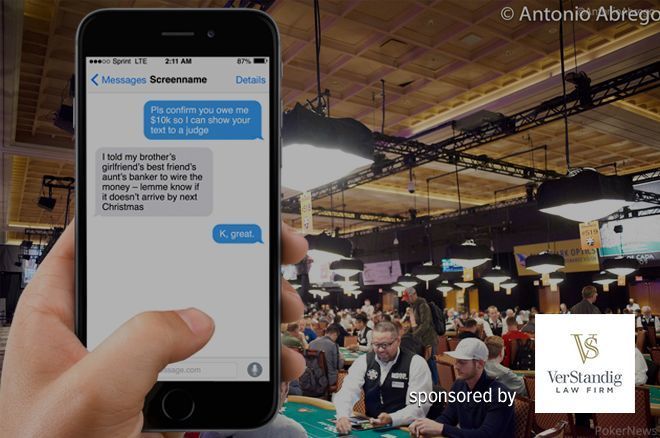 That the early days of this World Series of Poker saw vibrant online chatter concerning allegedly unpaid debts should come as no genuine surprise. While it is universally unnerving to see a colleague’s name and face put to the western hustler stereotype – truthfully, slanderously, or otherwise – one need not loiter too long in a Vegas card room to absorb colorful stories of angles shot well away from the tables.

one need not loiter too long in a Vegas card room to absorb colorful stories of angles shot well away from the tables.

So while I have hopefully offered some meaningful guidance on how to structure debts and staking arrangements in my first two columns of the summer, please permit this slight detour into the options available when someone is too brash, timid, naïve, or otherwise proud to heed such guidance.

Consider a purely hypothetical scenario involving a lender who we shall call “Lender,” a backer who we shall deem “Backer,” and a debtor/player with an alias to be known as “Nickname.”

In this fictitious construct, Nickname has borrowed $10,000 from Lender to finance his bankroll, and entered into a backing agreement with Backer to allow him entry into a diverse array of tournaments.

Nickname has elected to dishonor his debt to Lender, and to avoid tendering tournament proceeds to Backer.

Assume, too, that despite eventual success on the felt, Nickname has elected to dishonor his debt to Lender, and to avoid tendering tournament proceeds to Backer; none of the at-issue agreements are properly in writing; and nary a soul is entirely certain what other creditors may lurk in the tent village of poker sleepaway camp.

While Lender and Backer would no doubt be on safer footing, better served, and more reasonably confident of recourse if they had heeded my advice (ahem), they may still find a beacon of hope atop a local courthouse. But before pleading their cause to a robed arbiter, there will be some key points of consideration: