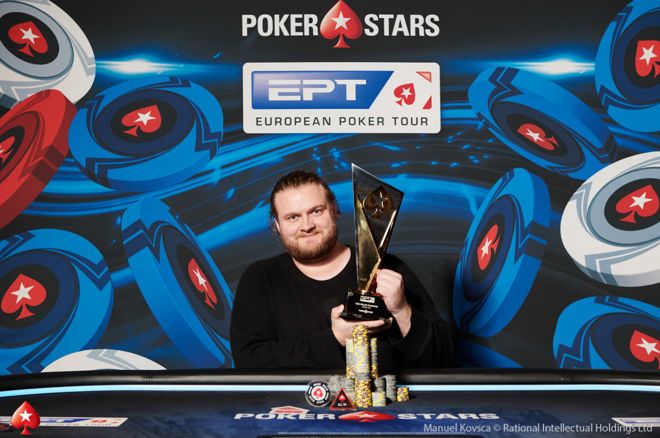 Fresh from a 23rd place finish in the EPT Prague Main Event, famed online player Hecklen navigated his way to the top of the 259 player field to walk away with the biggest live cash of his career.

The heads-up can only be described as an arm wrestle, with neither player managing to strike a decisive blow for quite some time. That was until shortly before midnight when Hecklen's queens held to send runner-up Ole Schemion to the rail for a €334,900 payday.

Here are the final results:

"You shouldn't look at two tournaments in correlation with each other," Hecklen told PokerNews after clinching victory, "But now that the Main Event didn't really work out it's nice to have this sort of consolation prize, and it's a good one obviously."

"My background is in deepstacked cash games and heads-up, I think the structure was very favourable for me."

"You always have your chances, right? You don't plan for anything in tournament poker."

There was no real clinching moment heads-up, and with both players deep they were able to take their time at the table.

"It was quite tough because there weren't that many showdowns so it was kinda hard to figure out what [Schemion] was doing but overall I think he played really well. It was a tough one.

"My background is in deepstacked cash games and heads-up, I think the structure was very favourable for me. It was certainly better than 20 big blind shoving poker. It suits me very well for sure.

The day started with the eliminations of Serdar Dermican and Charlie Carrel who brought the field down to the final two tables. Jasper Meijer van Putten still lead, but Daniel Dvoress was making up ground, especially with the elimination of Hon Cheong Lee.

Van Putten's stack would dwindle, but he would soon move back to the top of the chip counts with the elimination of Bahram Chobineh, but back came Dvoress who lead at the first break.

Triple Crown winner Niall Farrell would bust in 11th, with Max Silver out in tenth to bring it to the final table. Just before that, Frenchman Alexandre Reard would double through Van Putten whose turbulent day continued, and it was Reard occupying second place behind Dvoress at the start of the final table.

However he was soon overtaken by Henrik Hecklen who moved into the chip lead after rivering a straight against Reard, and once Reard doubled through Anton Yakuba, Dvoress finished off the Russian who bust in ninth.

Tomas Paiva doubled through Ole Schemion, with Dvoress moving up to around four million in chips. Michael Addamo would then double through the Canadian before a flurry of exits.

The Australian went first, shoving ace-king into the eights of Hecklen who then flopped a set. Then Van Putten, who had been involved in very few pots at the final table, shoved ace-three into the king-ten of Hecklen, who then turned a straight to bust the start-of-day chip leader.

Then, to finish off 15 minutes of madness, Paiva's nines were finished off by the queens of Hecklen who had in the course of those three eliminations chipped up to over five million in chips.

A quick finish looked in the offing, but former PSC High Roller champion Danny Tang doubled twice; through both Reard and Dvoress, to stick around, before Hecklen added his fourth elimination in a row as Dvoress hit the rail in fifth.

It was then Reard's turn to double three times as he recovered from a five big blind stack to over 40 big blinds, with Tang heading in the other direction. He was next to bust in fourth before a stunning hand eliminated Reard in third.

Reard had flopped a set and check-called all three streets, only for opponent Schemion to have rivered a straight and bust the Frenchman in third.

Heads-up play started with Schemion at a chip disadvantage against his Danish opponent, who was on a roll after so many consecutive eliminations. However that soon disappeared, and indeed it was Schemion who looked likely to pull away.

The German recorded two doubles during heads-up, but never quite managed to extend the chip lead to such a point as it looked like he might clinch it.

As it happened, the pendulum swung the other way and Hecklen soon got things back to how he started heads-up play. After one hand where Schemion spiked a three-outer on the river to stay alive and deny Hecklen, the Dane wasn't going to let the next opportunity slip out of his hands.

So when he picked up queens, they got in. They held. And Hecklen became the latest EPT High Roller champion.