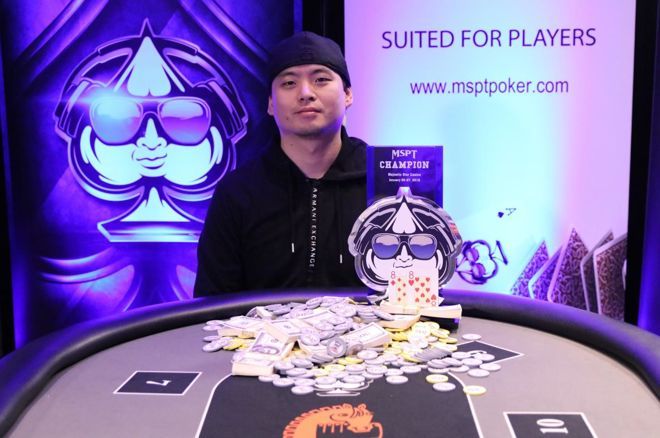 For the first time since 2014, the Mid-States Poker Tour (MSPT) returned to Majestic Star Casino in the Chicagoland area for a $1,100 Main Event. The tournament, which was brought in by poker room manager Nick Zacny, attracted 309 runners and came down to two familiar faces in Mike Shin and PokerNews’ very own Mo Nuwwarah, a poker media veteran.

The two engaged in an epic back-and-forth heads-up match, with both players seemingly in position to capture the title. Good calls were made, lucky cards rolled off, but in the end, it was Shin coming out on top to win a $68,593 first-place prize.

The win was the second-largest of Shin’s career after the $427,930 he received for finishing 12th in the 2016 World Series of Poker Main Event.

"It feels good, but you treat this as a business, you don't feel like you're hitting a jackpot."

"There were a couple of good players at the table, and I was trying to stay away from them. There was a couple of players I was trying to pick spots with and play hands with,” Shin told MSPT officials after the win. "It feels good, but you treat this as a business, you don't feel like you're hitting a jackpot; it feels like income that you're supposed to have."

Nuwwarah began the final table as the chip leader and got to work early eliminating Ashor Ochana, who three-bet all in with ace-four offsuit. Nuwwarah had pocket nines and held to score his first final table elimination.

Shin then sent Dan Sepiol packing in ninth place – the result of the latter jamming with jack-six only to run into kings blind on blind – and then Nuwwarah, who once again looked down at nines, dispatched Bryan Skreens, who had sixes, in eighth place.

Nuwwarah then eliminated Zach Schneider in seventh before Greg Baird got in on the action and busted Matt Weller in sixth. With five players remaining, Day 2 chip leader Brad Oliver took his lead after jamming with ace-seven and failing to get there against Jeremy Brown’s pocket tens.

Four-handed play was a lengthy affair but Brown busted after shoving with king-five from the small blind only to have Shin wake up with aces in the big. Shin then used pocket tens to take care of Baird, who got it in preflop with ace-nine.

Shin took a slight chip lead into heads-up play against Nuwwarah, but the two would swap it several times in the levels to come. In what would be the final hand of the tournament, which took place in Level 32 (80,000/160,000/20,000), Nuwwarah jammed 2.4 million with the

and Shin called holding the

Played my heart out. Cards did not cooperate. Much love to everyone for the sweats and big congrats to @mike4444s,… https://t.co/9aN2hfuus5

The $42,349 Nuwwarah received for his runner-up finish was the biggest of his playing career. His previous best was $17,170 for finishing sixth in November’s MSPT Meskwaki. A couple weeks before that, he also shipped a World Series of Poker Circuit ring at Horseshoe Hammond taking down Event #7: $600 H.O.R.S.E. for $14,008.

Season 10 of the MSPT continues this weekend with both a $350 Regional at Tropicana Evansville in Southern Indiana and the $1,100 buy-in Poker Bowl III at the Venetian in Las Vegas.

Images courtesy of the MSPT.