Terrence Chan Returns to Poker at the PSPC: "It's Not Like Any Other Event That's Ever Been Held" 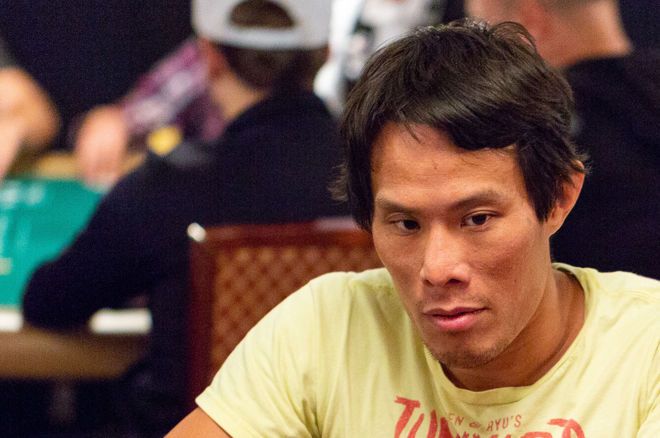 PokerStars gave away 320 Platinum Passes, the majority of them to people who don't regularly play events with a buy-in of $25,000, or much poker at all. A field like that attracts a whole lot of other poker players; from super high roller regulars like Justin Bonomo and Adrian Mateos to circuit grinders taking a shot like Josh Reichard and Max Young.

And then there's the group of players who once dominated poker, but have since left the game behind. Walking through the hallways of the Atlantis Resort, you'll recognize many players who came out of poker retirement to give this event a shot.

Terrence Chan is one of those players. He was there right when PokerStars set up shop in the early 2000s, heading the customer service team at what would become the world's largest poker room. When the poker boom made poker rooms explode, Chan traded the corporate job for the life of a poker pro. Chan dominated the limit hold'em tables, winning SCOOP and WCOOP titles and becoming a familiar face at the WSOP. Some years ago, the now 38-year old Chan made another impactful life change, focusing his attention on becoming a professional MMA fighter.

His last cash came from the 2017 WSOP, but here at the PokerStars NL Hold'em Player Championship, Chan is back.

"I said 'Fuck it, I'll work hard; I'll try hard and see if I can catch up to the top pros in the field and give it a shot."

"I think if you 're looking for a one-word answer; it would be FOMO," Chan said when asked what made him come out to the PSPC. The fear of missing out saw him take a flight from Canada to get to the Bahamas; "I heard everyone talking about it, and it looked like it was going to be a great field. So I just said; you know what..."

While him showing up in this event might not prove to be a comeback to life as a professional poker player, it ís more than just gambling in a big event for Chan. What seemingly goes for all the things in his life, if he goes for it, he really goes for it. Playing this event wasn't a last-minute decision; Chan decided quite some time ago to give the PSPC a shot and did everything he could to be competitive.

"I had a fight a few months ago, and it didn't go my way. So I've been looking to channel my energy into something else. So I channeled myself into really studying hard, and I said 'Fuck it, I'll work hard; I'll try hard and see if I can catch up to the top pros in the field and give it a shot."

Coming up in the world of poker, limit hold'em was the game of choice for Chan. That game's popularity has been on a multi-year decline to the point it's hardly offered anywhere outside of some events at the WSOP these days.

"You can't swim against the current. You can't try to play a game that's not there anymore. I stopped playing limit hold'em a really long time ago," Chan said about his somewhat involuntarily decision to get into no-limit hold'em. "The good news is there's so much information out there, so much more than there used to be about how to play good no-limit hold'em. So you just soak up as much energy and hope that you can become a better student and that you worked a little harder than everybody else. That's all you can do."

When you take a look at Chan's accomplishments over the last two decades, it seems that Chan has a high level of success in the things he puts his mind to. He was highly praised in his time with PokerStars setting up the gold-standard of customer service in poker at the time, he became one of the top (limit hold'em) poker pros, and is a successful MMA fighter today. Just glancing over his accomplishments showcases the evidence of some of the hard work he's put in.

His accomplishments haven't come without challenges though, and these days, Chan is experiencing a new kind of life challenge.

"We have a one-year-old baby now. I'm trying to make her the focus of my life, and that's really hard to do with fighting. I spend 3 or 4 hours a day in the gym (or traveling to the gym or taking care of my body and that kind of stuff), and that's really hard [to combine with being a father]. I still love to do it. I'm 38, kind of old for MMA. I would absolutely still love to do it but the time commitment of something like this is hard, especially when it's not something that pays the bills or anything."

"If you look at tournament numbers around the world, it seems that it's actually very healthy. It's like a renaissance."

In an interview with Nolan Dalla back in 2016, Chan said he saw his fighting career somewhat as an apprenticeship to become an MMA instructor. Asked if that was still his plan for the future, he said it was still of multiple possible trajectories. "I talked to my coach; he's a family man too so he understands that balancing being a pro fighter and a family man is hard. He said 'you can train the next generation.' I would take a lot of enjoyment out of that. I do love the sport; if my body would hold up, I would do it forever, but that's just not realistic."

Chan had a decent enough start in the event. In the first break, when we caught up with him, Chan was anything but unsatisfied; "It's a lot of fun, there's a lot of energy in the room. A lot of people who don't play a lot of poker, like myself, coming back out. It's a good time to be here."

When Chan first started in poker, half a decade before Chris Moneymaker would ignite the poker boom, poker was anything but mainstream. The biggest event of them all, the WSOP Main Event, attracted 500 players. Now, almost 20 years later, over 900 people signed up for a $25,000 buy-in event. "It's shocking. When I was with PokerStars, there really weren't $25,000 events at all, of any kind. Those didn't start till the mid-2000's," Chan said. "For them [(PokerStars)] to have 900 people, that's pretty fantastic. It's wonderful. PokerStars really went all-in in 2018 on making sure people got into this and make sure they played it."

Chan had a front-row seat when poker ballooned, but he also witnessed up close the decline in popularity that followed. The PSPC may be an outlier, an exceptional event pushed hard by the biggest player in the game, and might not be a reliable indicator of the state of poker. But, looking at the bigger picture with the PSPC's entry-number considered as just one of many data points to assess the game's popularity, things don't seem all that bad.

"PokerStars really went all-in in 2018 on making sure people got into this and make sure they played it."

"If you look at tournament numbers around the world, it seems that it's actually very healthy. It's like a renaissance," Chan said. "I think it changed a lot from a gambling recreational game to now where everyone is a bit more serious. Even the recreational players are serious; they get coaching, they study online. I think it's a different evolution of the game. It's definitely not as mainstream as it once was from a pure gambling perspective. It's something the people who continue to play it, they take very seriously and they really enjoy doing it."

The game, one might say, has matured. People realize that to be competitive, one needs to have a strategy a bit more balanced than some years ago. Chan, having been out of the game for a bit, had a hard time coming up with an answer to the question where he ranks himself in the PSPC. Given the polarized playing field, judging his own skills proved not that easy. "Oh god, the variance could be tremendous. I could be maybe in the top 20 percent, or I could be in the bottom 20 percent. I really don't know."

Given the fact that Chan had played on a single table when we talked to him, gives him an incomplete scope of the field. "I've seen some really great players and some weaker players for sure. It's really hard to say. It so unique; it's one-of-a-kind for sure. It's not like any other event that's ever been held."

All photos taken at the WSOP.
The Stars Group owns a majority shareholding in iBus Media.