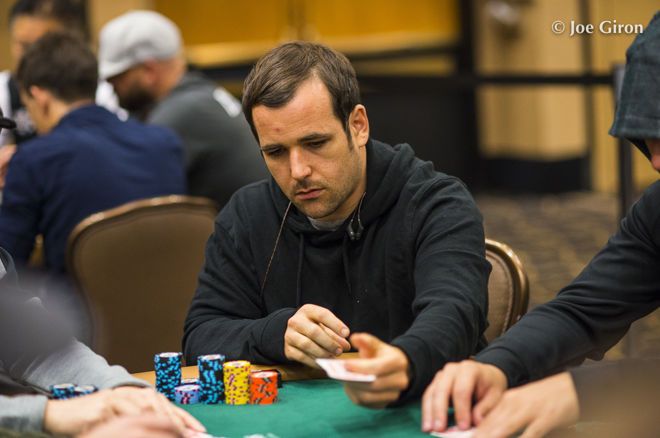 A total of 64 entrants came out for Event #2: $10,000 PLO at the US Poker Open and play carried on until only six remained at the completion of the day. Finding the chip lead at the end of Day 1 was Jordan Cristos who bagged 2,445,000 chips, almost a million more than his nearest competitor Cary Katz. Cristos is locking up his second cash of the series so far after taking 11th in Event #1: $10,000 No-Limit Hold'em.

Among others at the final table are Adam Hendrix, Martin Zamani, Manig Loeser and Sean Winter. Winter is making his second final table of the series. With a fourth-place finish or better, Winter will take over the points lead for the series, putting him in the prime position to collect the $100,000 prize. A fifth-place finish would tie him with Stephen Chidwick who won Event #1: $10,000 No-Limit Hold'em. Winter finished runner-up in that tournament.

Chidwick was among the entrants in today's event not to cash. Other's who didn't make it into the money include Justin Bonomo, Koray Aldemir, Chance Kornuth, Alex Foxen, Joseph Cheong, Jake Schindler, Justin Young, Ryan Riess, Anthony Zinno, Brandon Adams, and Kristen Bicknell. Adams was the bubble boy of the event, busting when he flopped top set and a straight draw against Hendrix, who held aces and the nut flush draw. The turn was brick, but the river gave Hendrix his flush and sent Adams to the rail in 11th place as the last player to walk away without a payday.

The last few to walk away in the money on Day 1 were Anthony Alberto, Ben Yu, Dan Shak, and Brent Roberts. Roberts came into the final seven as the shortest stack but managed to find a few doubles to keep himself alive. In his final hand, Roberts flopped trips in a limp pot. Action checked around and on the turn, Roberts put in most of his stack. Zamani called and the on the river, Roberts moved all in. Zamani quickly called. Roberts rivered a full house, nines full of deuces, but Zamani had turned a better full house to finish play for the day.

Here's a look at how the final six players stack up:

Currently, all players left alive are guaranteed at least $38,400 but everyone is fighting for the first place prize of $179,200. Action will kick back off at 1 p.m. local time and the live stream of the event will begin at 2 p.m. local time on PokerGo. Subscribe to PokerGO for just $10 a month or $99 a year to watch nine straight days of U.S. Poker Open final table action plus PokerGO’s full catalog of programming.

The PokerNews live reporting team will be there to bring you all the Final Table action of this event. Stay tuned for updates on the remaining nine events that follow. You can check out the updates via the US Poker Open Live Reporting.