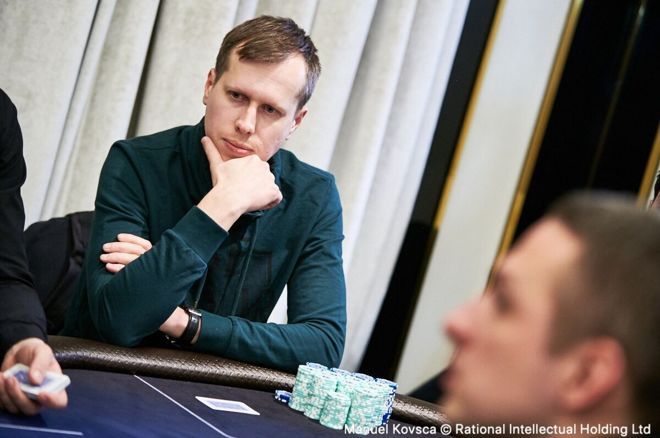 Day 2 of the EPT National at PokerStars EPT Sochi is in the books! Yury Masliankou (lead photo) finished on top of the counts and will enter the final table with 5,260,000 chips. Giorgiy Skhulukhiya (4,145,000) returns in second place and Leonid Bilokur (3,210,000) rounds out the top three.

Daniil Lukin, Andrey Lukyanov, Alexandr Sergutin, Kartik Ved, and Sarkis Karabadzhakyan are all still in contention and with RUB 9,317,000 ($139,755) up top, we don't expect anyone to give up without a fight.

After almost 10 hours of play, Masliankou is the man who will start in front. In the biggest hand of the tournament so far, he took the chip lead from Skhulukhiya in the last hand of Level 25. Masliankou took a chunk of Skhulukhiya's chips after six-betting all in, and Skhulukhiya thought long and hard before folding. The Belarussian held onto that lead for the remainder of the day and starts with a quarter of the chips in play, which is double the average.

It was an exciting day of poker from the start with a slew of eliminations before the first break. Matous Houzvicek began with the chip lead and had a strong start for the first few levels but the tide turned, and Houzvicek lost a series of pots that chipped away at his stack. One of the most significant setbacks was in a clash with Kartik Ved. Ved moved all in on the river with four clubs down, and Houzvicek let it go. He was unable to recover from there.

Houzvicek wasn't the only big name to exit during Day 2, with Team PokerStars Pro Mikhail Shalamov eliminated before the first break. Kiryl Radzivonau, Aleksandr Denisov, Dmitry Yurasov and Day 1b joint chip leaders Yaniv Peretz and Andrey Chernokoz, were just some of the notables to fall by the wayside during Day 2.

With 40 minutes and 47 seconds left on the clock for Level 26, the final table was reached. It came at the expense of Artur Martirosyan who three-bet all in from the small blind against Daniil Lukin's cutoff open and ran ace-jack into pocket queens. It wasn't long after the final table redraw that we saw the last elimination of the night. Sergey Petrushevskiy moved all in with ace-ten for a total of 10 big blinds over an open by Alexandr Sergutin and ran into pocket rockets. He earned RUB 700,000 ($10,500) for his ninth-place result.

Join PokerNews for all the action from the moment cards are in the air until the new EPT Sochi 2019 National Champion is crowned.

You can follow along with the 2019 PokerStars EPT Sochi ₽77,000 EPT National final table live updates and follow the EPT Sochi Main Event in the PokerNews Live Reporting section.