Off the Felt: Funniest Tweets from Poker Twitter & Sightseeing in Rio de Janeiro 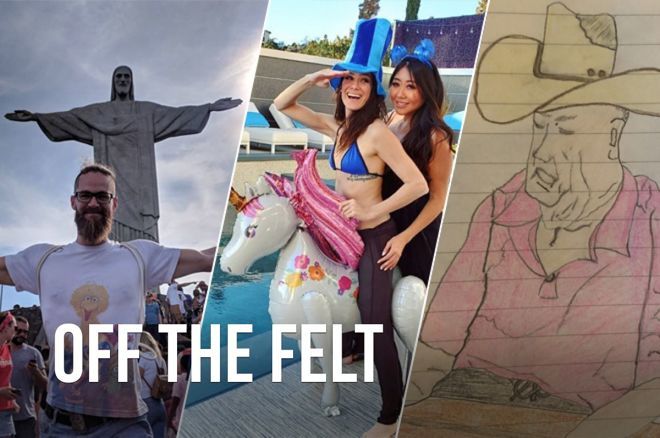 In the latest edition of Off the Felt, we looked at Sam Trickett and Dan Smith in Japan, while Steven van Zadelhoff celebrated his 40th birthday being in the best shape of his life. This week, we got you the funniest tweets from Poker Twitter and players who are sightseeing in Rio de Janeiro in their time off the felt.

Mike Gorodinsky started to make portraits from poker players on Twitter and we have to say: he nailed it.

Extremely excited that so many of you are foolish enough to sign on for this! Since a few have requested it, and it… https://t.co/Q1BQ3VYn7U

Massive thanks to @gordoMG for this stunning portrait. Nailed it. https://t.co/2N6mK9Sgdd

Jamie Kerstetter with a great suggestion for the Bravo app:

Many people dream of becoming a poker pro, but for this guy, that dream didn't turn out quite as planned:

I always dreamed of becoming a poker pro. I started out playing online, and later moved to Las Vegas to play for a… https://t.co/PHmdVkeKvH

Some advice from Garrett Adelstein:

Yes, we all know what Lexi Sterner is talking about:

Poker has wrecked my concept of money. My mom still drives to a diff grocery store if an item is 0.33 cents cheaper… https://t.co/PwY12sywLe

There is literally nothing I hate more than explaining being a poker player to a non poker player. #soitsjustlikeblackjackright #poker

You can always count on Erik Seidel to keep a good perspective on things:

A guy just told me I look exactly the same as when we met 30 years ago, made me appreciate my wife even more for ma… https://t.co/zMqcG0Yniy

Well, that's one way to make a read:

I recently based my decision on whether to call a guy's allin or not based on the fact that his video-feed showed t… https://t.co/pJsWH0KKWl

When you better look for a new place to stay:

Me: My room is missing an iron. Front Desk: It’s in the closet.

Some players are visiting Rio de Janeiro, Brazil, for the partypoker MILLIONS South America but they are not only playing poker. A few of them decided to do some sightseeing in this beautiful city:

And Hellmuth is gonna Hellmuth. Here's his entrance into the event:

Off the Felt: Love on Valentine's Day & Snow in Las Vegas!