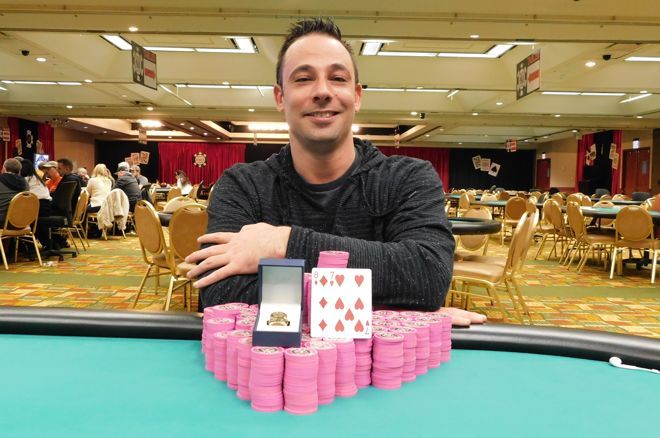 The packed World Series of Poker Circuit schedule rolled on with the Harrah's Atlantic City stop, and Ryan Eriquezzo won the $1,700 Main Event for the second time, defeating a field of 357 to take down a first-place prize of $124,397.

Eriquezzo had previously won the Circuit Main in Atlantic City in 2012, topping a field of 635 for $191,194. This win is Eriquezzo's fourth ring overall, and he now has over $1.5 million in live tournament cashes.

The 357 entries enabled the tournament to surpass the guarantee of $400,000 and create a prize pool just over $540,000. Some of those who got a cut among the 36 paid places included Anthony Maio, Matt Brady, Roman Valerstein, Joseph Liberta and Aaron Mermelstein.

Eriquezzo put himself in good position for the final table, which he went into with the lead, after he won a three-way all in with aces against pocket tens of Mermelstein and another player's

, according to the live updates. He would then get the rest of Mermelstein's chips picking off a bluff and then winning another preflop all in for his final crumbs.

However, he slipped to the middle of the pack going into the final day, which saw nine players still remaining.

Renata Colache had built into the chip lead but she was actually second to go bust on Day 3. She got kings cracked by a two-outer on the river and then lost a flip for her remaining chips to Denis Gnidash. Gnidash stayed hot as he flopped the nut flush and fired three barrels to bust Ross Gottlieb, who couldn't get away from top pair after defending big blind versus button.

After John Forlenza and Ryan McKnight busted out, Eriquezzo finally picked up some steam as he made a few hands and got paid off to surge into the lead four-handed.

After Richard Henheide busted when a flopped straight fell to Kurt Lichtman's top set, Eriquezzo busted Lichtman in a flip to get to heads up against Gnidash.

Eriquezzo started with the lead and soon was up nearly 4-1. Gnidash pulled off one double after he was short, but Eriquezzo would flop the nut straight on

after raising on the button. Gnidash check-jammed with top pair and things were all wrapped up on the turn when Gnidash didn't improve.

Throughout the series at Harrah's Atlantic City, players had the chance to earn points toward the venue leaderboard with the top player earning a spot in the $1 million guaranteed Global Casino Championship.

When the dust settled at the conclusion of the 13 ring events, Michael Marder had piled up an astonishing 132 points, highlighted by a ring win in the $400 No-Limit Hold'em near the end of the series for $10,394.

Joe McKeehen was also among the ring winners as he took down the opening event for $15,328.