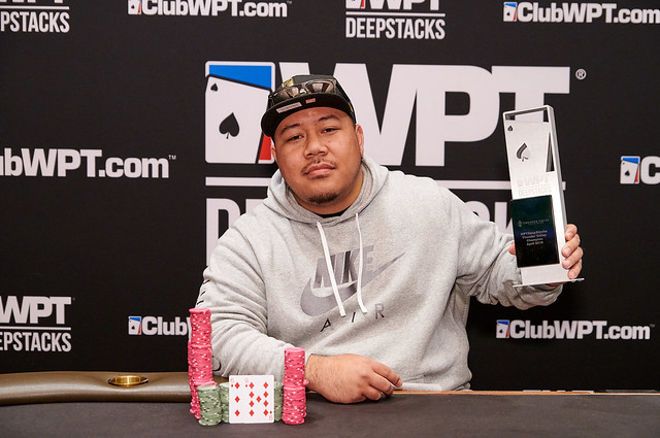 The win continues a hot start to the year for Hunkin, who last month won a $1K prelim event for $50,565 in the Bay 101 Shooting Star event in San Jose. Before that win, Hunkin had under $20K in live tournament cashes on his Hendon Mob. He has increased that to $200K in less than one month.

On his road to victory at Thunder Valley, Hunkin got through a field of 678 in the $1,100 buy-in event, and attributed the his recent good run to hard work and familial support.

“Hard work, I’ve been playing a long time, I have really good support from my wife and my mom and my brother," he told WPT officials after the win. "God is good, for sure."

The final nine players returned on Monday and Hunkin was in the middle of the pack. They lost the first three players in fairly quick succession, start-of-day chip leader Mike Abratique responsible for two of the early eliminations.

After Aaron Dalnoot was eliminated in sixth place, Hunkin started his ascent from short stack to chip leader. First, he doubled with ace-deuce suited versus John Hadley’s pocket queens when he found two aces on the flop; Hadley was left with crumbs and was the next one out.

Down to four players, Hunkin went on a tear, doubling through Abratique when his pocket nines held versus pocket deuces, then eliminating Nick Wooderson winning a flip with pocket eights versus ace-king. That hand gave Hunkin his first lead of the day and he never looked back.

"I never devalued my stack. I kept grinding, got lucky in a few spots, and it paid off.”

He continued running good, flopping a set of deuces against Abratique’s top two pair to send the latter out in third, and took a nearly three-to-one chip lead into heads up.

The match with Yury Klimenkov was short, and it ended when Hunkin flopped top pair with six-nine on a six-three-three board. Klimenkov got it in with pocket fours and Hunkin held on for the win. About the final table comeback, Hunkin had this to say:

“It’s really good, I never devalued my stack. I kept grinding, got lucky in a few spots, and it paid off.”

Along with his biggest score ever, the Daly City, California, resident also won himself a seat into the $3,000 WPTDS Championship event, which he looks forward to playing.

“It feels awesome, WPT runs some of the best tournaments for sure so I’m excited.”