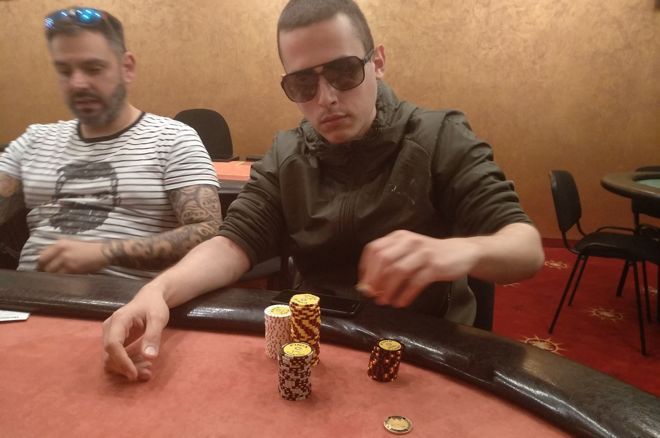 The first flight of the 2019 PokerNews Cup High Roller Casino Finix attracted 28 entries (including one reentry), and after 10 levels of 45 minutes each, 12 of them advanced to Day 2.

Ivan Ivanov is the player who gathered most of the chips with 631,500, and he had to hit a big river in order to take the chip lead in the middle of Day 1a. He had a set and he was against a straight when the chips went into the pot, with only one card remaining to complete the board. The river gave him the boat he needed to stay alive, and he managed to keep that huge stack until the end of the day. "I knew it was coming," he told PokerNews full of confidence after the hand.

The players had the chance to re-enter up to two times on Sunday, but the only player who took advantage of that option was Dimitrios Dimitros, raising the event's total entries to 28. The Greek bluffed off his stack in his first try but then came back and managed to hit many big hands, resulting in him finishing the day with 547,500 which is the second biggest stack of the day.

David Reef from Israel is the player who rounds out the top three stacks of the day, bagging 390,000 for Day 2.

28 players entered Day 1a which means that 16 of them left the field, having to try another day to advance to Day 2. Some of the players that didn't make it are Achilleas Nomidis, Dejan Stanev, George Efthimiadis, "POLY10", Emil Trenkov and Georgios Zarogiannis amongst others.

Day 1b is scheduled for tomorrow Monday the 13th May at 5 p.m. local time. Stay tuned for more updates from the PokerNews Live Reporting team during the 2019 PokerNews Cup in Finix Casino, located in Kulata, Bulgaria.

A Quick Guide to the Best Blackjack Betting Strategy