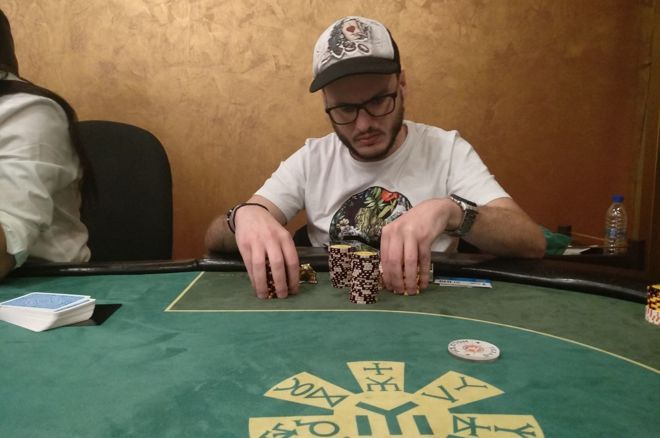 Day 1b of the 2019 PokerNews Cup €1,100 High Roller is in the books at the Finix Casino and 19 more players were added to the field plus two more re-entries. After 10 levels of 45 minutes each, eight players were left to advance to Day 2, while the total number of entries for the High Roller increased to 49 entries.

Bulgaria's Marcel Galustov ended the day as the chip leader with 614,500, but he still didn't manage to reach Day 1a's leader as Ivan Ivanov advanced with 631,500. He will have to wait for Day 1c to see if he will get to Day 2 with the overall chip lead.

Galustov won the biggest pot of the day in a three-way all-in situation when he was holding a pair and small flush draw versus an overpair and a higher flush draw of his two opponents, respectively. He managed to turn trips and won the half-million chip pot, ascending to the top of the counts.

Marios Tzakos (pictured above) late registered the event and managed to build a stack of 346,000 chips, putting him in the second place in the Day 1b chip counts. Galustov didn't want a photo but he sure was happy for his journey during Day 1b.

So far, 20 players have advanced to Day 2 and we are waiting for Tuesday's Day 1c that will determine the total players of the High Roller. Keep in my mind that registration will remain open during the first two levels of Day 2, so the exact number of entries, as well as the prize pool and payout information, won't be known until then.

The PokerNews live reporting team will be back on the tournament floor of Finix Casino when Day 1c kicks off at 5 p.m. local time on Tuesday. Be sure to follow our live updates here.