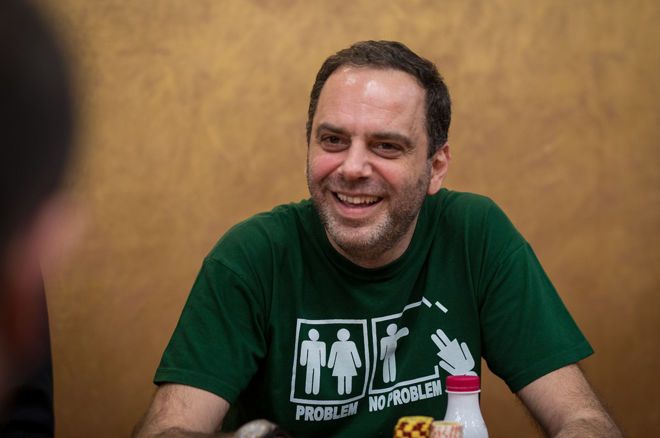 The 2019 PokerNews Cup is in full swing in the Finix Casino in Kulata, Bulgaria! The €1,100 High Roller saw its second day come to a conclusion with just six players left standing. Each of them is already guaranteed €4,410, but the biggest slice of €28,100 awaits the winner on Thursday, May 16.

Day 2 started with 37 players taking their seats and nine more entries were added to the field to put the total number of entries at 89. Thirteen of them would end up in the money and Sotirios Koutoupas was the player who busted on the money bubble. The former EPT champ shoved with threes and got called by Andreas Halkiadakis who was holding tens. Koutoupas didn't improve to leave the field with thirteen.

The first player to leave the final table was Konstantinos Nanos who lost with ace-deuce vs Michailidis' ace-king and busted in 9th place for €2,550. Leonidas Mavidis followed him in 8th place losing with threes against Tzakos' jacks and earned €3,070.

Right before the last elimination of Day 2, Dimitrios Dimitros and Marios Tzakos played a gigantic pot, which was the biggest of the event so far, and left Dimitros with six big blinds to work with during Day 3. Tzakos had kings and Dimitros queen-jack, with all the chips getting in the middle on the turn, where Dimitros had an open-ended straight draw and Tzakos had an overpair. The river didn't help Dimitros to make the Tzakos the overwhelming chip leader.

The last player who left the final table was Andreas Halkiadakis when he fell with ace-queen on Galustov's kings and finished 7th for €3,640. Finix Casino poker room owner Polykarpos Stryvakis (pictured, header) is among those that made the final table.

The first of four opening flights of the 2019 PokerNews Cup Finix Casino €550 Main Event at Finix Casino is also in the books, after 18 blinds levels of 30 minutes each.

Day 1a attracted 24 entrants including four reentries, all of which were from Bulgaria and Greece. By the end of the day, the field was trimmed down to just four players, each of which will enter Day 2 already in the money with each flight playing down to 15 percent of the field.

Bulgaria's Marian Ivanov bagged almost half the chips in play and will head to Saturday's Day 2 with a big stack of 580,000 in chips. The other three players to bag chips were all from Greece including Christina Orfanidou with 324,000, Symeon Marvakis with 148,000, and Savvas Baltiras with 132,000.

The PokerNews Live Reporting Team will be back to cover Day 1b of the Main Event at 4 p.m. EEST and also cover the final day of the PokerNews Cup €1,100 High Roller at 3 p.m. with Greece's Marios Tzakos currently in the driver's seat with six players left to win the €28,100 top prize.

The PokerNews Cup Main Event Begins May 15 at Finix Casino