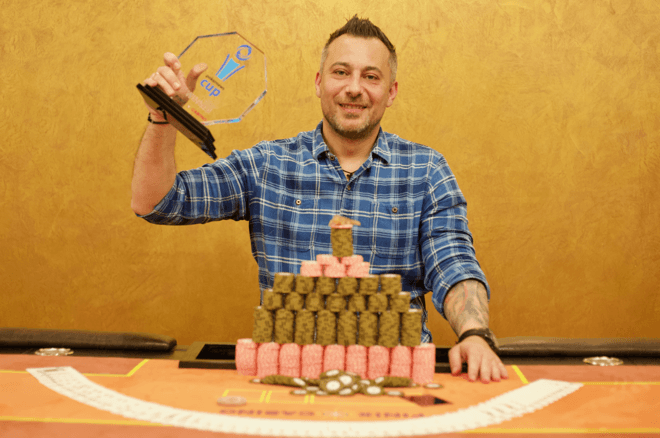 The win nearly tripled the almost $7,000 in live tournament cashes Panagiotidis had to start the tournament.

The final day began with the field already whittled down from 141 entrants to an eight-max final table. Panagiotidis entered the day in the chip lead, although he didn't hold onto it throughout the final day.

Ivanov was the first player eliminated at the final table. He jammed with queen-eight with an open-ended straight draw on the turn only to be called by Simeonov with second pair holding jack-deuce. Another jack came on the river and Ivanov headed to the cashier to collect the eighth-place prize of €2,350.

Soon after, Spyridon Michailidis hit the rail in seventh place for €3,180. He three-bet jammed ace-seven suited and didn't get there against the pocket eights held by Konstantin Aykov.

A little time passed before Loukas Kioutsoukis was eliminated in sixth place for €4,170. He three-bet jammed a short-stack with king-queen and ran into Simeonov's kings.

At this point, Simeonov was in the lead. This didn't last long as Dimitrios Michailidis took the lead with a full house in a big pot against Simeonov. Michailidis was unable to hold onto the lead when Panagiotidis bet all three streets after first hitting a set of nines on the flop and quads on the river. Michailidis called with pocket queens all the way to surrender the lead to his adversary.

A short while later, Michailidis shoved 15 big blinds with ace-ten from the button. Simeonov quickly called from the big blind with kings. The flop gave Simeonov a set and Michailidis was drawing dead on the turn (fifth - €5,250). It was Michailidis' second cash of the week after winning the PokerNews Cup High Roller earlier this week for €23,025.

After a short deliberation, the four-way deal was struck and play ended on the spot with Panagiotidis crowned as the official champion.

This concludes our coverage of the PokerNews Cup Main Event, and the first-ever to be held in the Finix Casino in Kulata, Bulgaria, just over the greek border.