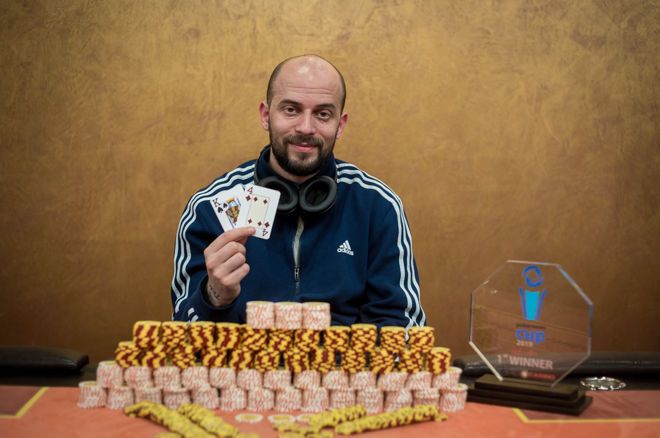 The 2019 PokerNews Cup €1,100 High Roller has crowned its champion here in Finix Casino and it was Dimitrios Michailidis that was victorious in an 89-player field. Michailidis defeated Marios Tzakos heads-up after a long battle that lasted more than three hours and received €23,025 ($25,724) for his victory.

This wasn't the biggest cash in Michailidis' career since the Greek player had success in many live tournaments around Europe. His biggest cash came in August 2018 where he won a side event during 2018 European Poker Tour Barcelona for €55,400. His win in the High Roller ranks as 4th in the list with his lifetime cashes, based on The Hendon Mob's database.

The last day started with six players, where Dimitrios Dimitros had to work his way with just 6 big blinds. He managed to spin it up a bit in the early stages before getting his chips in the middle with ace-sixonin a two-three-four flop/ Marcel Galustov called him with king-four and held all the way. Dimitros earned €4,410 for his efforts.

Next to depart was Loukas Kioutsoukis, who called all in against Tzakos on the river holding the ignorant end with four to a straight on the board. Tzakos held the higher straight and Kioutsoukis run was good enough to earn him €6,120.

Polykarpos Stryvakis is the player who busted in fourth place, losing a big chunk of his stack when he made a call on the river and mucked versus Galustov's trips. He was left with three blinds and put them in the middle in the next hand, with Michailidis and Tzakos calling him and checking down up to the river. Michailidis made a pair which was enough to send the Finix Casino poker room owner to the rail with a payout of €7,970.

Three-handed play started with the three players almost even in chips. Galustov was the first to bust after dwindling down to fourteen big blinds earlier. In his final hand, Tzakos shoved from the small blind with ace-seven, Galustov called with jack-eight and the board kept the ace-high ahead to send Galustov off to collect €9,990.

Michailidis and Tzakos played heads-up for a bit, with Tzakos having a big advantage over his opponent. Michailidis managed to get back and even the two stacks. With stacks equal, the two players opted to see the numbers and then decided to split the money in half, leaving €1,500 and the trophy for the winner.

After the deal was made, the two played it out normally for a bit longer before the players decided to speed it up and go all-in most of the hands. It took eleven all-ins eventually before Michailidis was crowned the victor.

The second of four opening flights of the 2019 PokerNews Cup Kulata €550 Main Event at Finix Casino is in the books after 14 blinds levels of 30 minutes each.

Day 1b attracted 28 entrants including five reentries, all of which were from Bulgaria and Greece to bring the total field up to 52 entrants between the two starting flights.

By the end of the day, the field was trimmed down to just five players, each of which will enter Day 2 already in the money with each flight playing down to 15 percent of the field.

Bulgaria's Rosen Simeonov bagged almost half the chips in play and will head to Saturday's Day 2 with a big stack of 640,000 in chips. This places him ahead of Day 1a chip leader Marian Ivanov who managed to bag a healthy stack of 580,000 in chips.

Simeonov took a considerable lead early in the day and never looked back with no other player ever coming close to his chip stack.

The PokerNews Live Reporting Team will be back on the floor for coverage of Day 1c and 1d of the Main Event at 1 p.m. EEST.

The PokerNews Cup Main Event Begins May 15 at Finix Casino