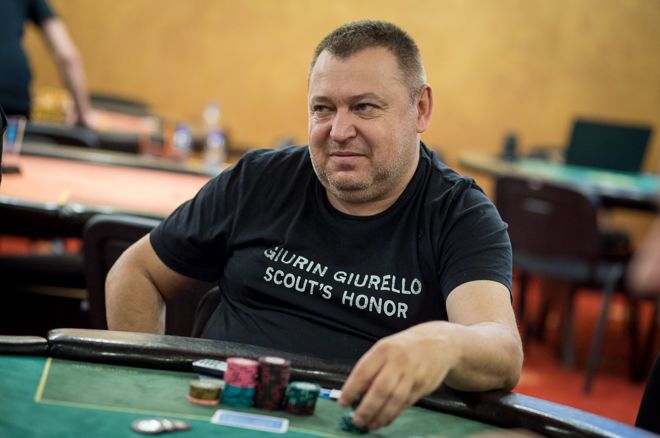 The four opening flights of the PokerNews Cup Kulata €550 Main Event are in the books. A total of 141 entrants including 61 on today's Day 1c and 28 on Day 1d battled it out in hopes of advancing to Day 2 where players are already in the money with each opening flight playing down to 15 percent of the field.

Panagiotis Panagiotidis bagged a Day 1c chip leading stack of 636,000 and is second in the chip counts only a big blind behind Day 1b chip leader Rosen Simeonov with 640,000.

Panagiotidis had the chip lead midway through the day before he expanded it much further when he won a massive three-way pot when his aces held against his opponent's ace-king and ace-jack.

Day 1d began midway through Day 1c. Five players advanced led by Greece's Dimitrios Michailidis. Regardless of how things end for Michailidis on Day 2 and beyond, he already had an amazing PokerNews Cup as he shipped the High Roller on Thursday for €23,025 ($25,873) after agreeing to a heads-up deal with Marios Tzakos.

To add to the fun, Dimitrios Michailidis will be sitting next to his brother Spyridon Michailidis after a random draw with both players holding top five chip stacks heading into the day.

Both Panagiotidis and Michailidis will head into Day 2 near the top of the leaderboard. Here is a look at the top five starting stacks to start the day.

Day 2 will begin on Saturday, May 18 at 1 p.m. EEST with blinds at 2,000/4,000 and a big blind ante of 4,000. Each level will be 40 minutes in length and the action will play down to a final table and beyond. If the players agree, the event might conclude on Saturday if the late stages are reached quickly. Payouts will be announced as soon as the day starts.