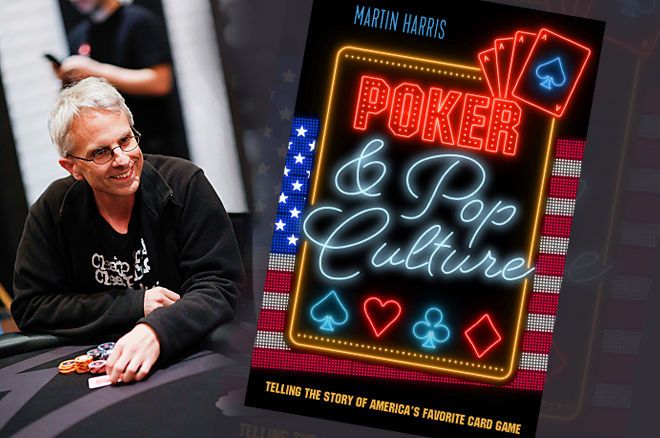 Poker and gambling have been woven into the very fabric of American popular culture for the better part of a century, infiltrating film, television, literature, politics - you name it. In different moments in our history, poker has been romanticized and glorified, and at other times denigrated, condemned and prohibited.

Lucky for the poker world, we have our very own poker and pop culture historian in PokerNews Associate Editor and Head of Strategy Content Martin Harris to guide us through the history of poker's tumultuous progress in American culture.

"The fact that poker is such a popular game obviously says something about Americans and the people who play it."

A professor at UNC Charlotte, Harris has been fascinated with the ways in which poker has been represented in various forms of media since he picked up the game as many did - during the Moneymaker boom in the early 2000s. His D&B Poker Publishing book entitled Poker and Pop Culture has been over a decade in the making, and spans around two centuries of material.

What started as an academic interest in popular culture - Harris has penned academic articles on horror movies like The Blair Witch Project and Halloween - has blossomed into a deep exploration of America's fascination with the game that we all know and love. As Harris put it, he was interested in the question of, "Why it is that some things become really popular and how the things that we find popular reflect something about the culture."

He continued: "The fact that poker is such a popular game obviously says something about Americans and the people who play it - what excites them and interests them, and what their values are. I guess that kind of set me up for this way of talking about poker or investigating poker's history."

The book charts the long and winding journey poker has had alongside American culture, which of course encapsulates a wide range of time periods, genres and groups of people.

"As a gambling game with mass appeal, poker has been played by presidents and peasants, at kitchen tables and final tables, for matchsticks and millions," reads the book description.

It's these stories and representations that you can expect to explore in the book, in which Harris charts poker’s progress "from 19th-century steamboats and saloons to 21st-century virtual tables online."

Birth of the Book Project

Harris combined his newfound poker hobby and his intrigue with poker in pop culture in 2006 when he was teaching college full-time and playing online poker on the side. He started a blog where he explored some of poker’s representations in various media forms that he discovered in articles from Rolling Stone Magazine.

Many readers found the material interesting and in 2007, then Editor in Chief of PokerNews Haley Hintze invited Harris to write for what would become the “Poker and Pop Culture” column. Some of those early articles from 12 years back made their way into the book, hence forming the seeds of the book project that would sprout about a decade later.

Tommy Angelo: "Poker’s place in our culture has been Martin’s passion and expertise as long as I’ve known him."

Harris continued to research and write about the popular topic for other publications and in 2011, he created a course called "Poker in American Film" within an American Studies Program. The course, which coincidentally coincided with poker's online demise in the U.S. (Black Friday), delved into the history of poker and pop culture representations of the game, especially in movies.

And so Harris' store of content grew more vast, especially as he became the go-to for sending interesting or obscure poker and pop culture references people would come across. For all of the aforementioned reasons, Harris was uniquely positioned to compile all the history and stories in book form.

As renowned poker author Tommy Angelo put it: "This book had to be written, and only one person could write it. Poker’s place in our culture has been Martin’s passion and expertise as long as I’ve known him. Poker is a story of a thousand stories, and they’re all here."

Paring down 12 years of research that spans two centuries is as daunting a task as it sounds, and that was one of the biggest challenges Harris faced in turning his materials into a digestible read.

Through ample planning and several iterations, they settled on an organization by topics that also mostly follows a chronological order, from poker on the Mississippi to the Old West to the Civil War, and so on. Deeper into the book, readers will find more genre-specific chapters like poker in the movies, in literature, on T.V., in the White House etc., making it easy for those interested in a specific topic to find it.

"It's definitely a book that's going to be interesting to people who are into poker and who are curious about poker history, and about popular culture too."

With 23 chapters in the final version, the book is still quite hefty yet digestible and Harris even tackled the task of recording a full audio version of the book for those who’d rather listen to the rich history of poker lore than thumb through it. Both versions are now available for purchase.

According to Harris and the reviewers, there's something for everyone in the book, and even readers who have never played a hand of poker will be able to find entertainment and insights into American history and culture throughout the chapters.

"It's definitely a book that's going to be interesting to people who are into poker and who are curious about poker history, and about popular culture too. I feel like it's also a book that might even appeal to people who aren't necessarily poker fans."

You can purchase your very own copy of Poker and Pop Culture: Telling the Story of America's Favorite Card Game in paperback ($24.95) or audiobook version ($12.95) at D&B Poker, Amazon, Barnes & Noble, or pick one up at the D&B Poker booth at the Rio during the WSOP.