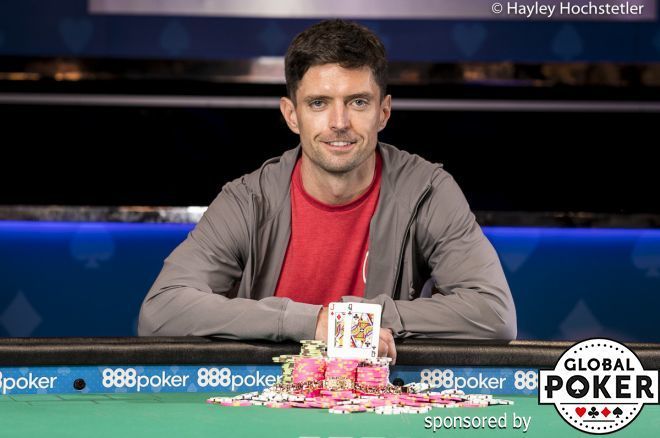 After a sixth-place finish in the $50,000 High Roller for $275,874, Tilston came into the final day of play in the biggest buy-in event of the 2019 WSOP as the chip leader but the only player without a bracelet. That's all changed now.

Negreanu came into the final table as the short stack and doubled up on five separate occasions. In fact, he doubled through everyone at the table apart from eventual champion Tilston. He notched his second runner-up finish at his fourth final table of this year's WSOP, unofficially tying Phil Hellmuth's record for most second-place finishes with ten.

Coming into the 2019 WSOP, Tilston had eight WSOP cashes stretching back to 2006 including two Main Event cashes in the last four years.

Tilston is no stranger to high-roller tournaments and the subtle reaction to winning his first-ever WSOP gold bracelet along with his largest career payday was no different. A hug from his mother who was on the rail cheering him on for much of the final table was about the most emotion Tilston gave away.

"I've been running pretty well for the past year and things have just been going my way."

"It feels great to win one against this type of field," he said. "I've been running pretty well for the past year and things have just been going my way. I've been playing a bit more, usually see how I do to start the year and go from there."

Tilston had to overcome the fan-favorite Negreanu in order to win but he said that didn't bother him one bit.

"It was kind of surreal to be playing heads-up against Daniel. Any other time I would be rooting for him. Obviously, everyone here was in his corner," but Tilston kept his head down and did what he does best, play some solid poker. "I'm happy with how I played. I didn't really make any mistakes."

This marked the eighth occasion since Negreanu's last bracelet win in 2013 where he finished in the podium spots, but after a summer where he notched 15 cashes, $1,725,838 should soften the blow.

Once play got underway, there was action aplenty as start-of-day short stack Negreanu doubled twice in quick succession to move up to second in the chip counts. However, his ascent was short lived and no sooner had he acquired these chips, he bluffed them off to Igor Kurganov.

After both players checked a nine-high flop, Negreanu bet both turn and river with Kurganov calling it off with just a pair of eights. Negreanu held just ace-high and fell back down the counts once more.

This helped Kurganov move into the second spot on the leaderboard behind Tilston. However, a quick spurt from Nick Schulman saw him overtake the pair and he led by the first break of the day.

With no eliminations up until this point, two eliminations came in quick succession when play resumed. First, Dominik Nitsche was sent to the rail after Kurganov rivered a three-outer. Kurganov then added the elimination of Brandon Adams on the very next hand, with Adams getting king-nine against ace-nine and bricking to bring play to four-handed.

Kurganov had held a commanding chip lead late on Day 2, only to see it chipped away and eventually surpassed by Tilston. This time Negreanu called a halt to his lead, doubling for a third time at the final table with ace-eight against king-queen.

Kurganov was then sent to the rail in fourth place at the hands of Tilston, who returned to the top of the pile.

Negreanu grabbed himself a fourth double and then a fifth, both through Schulman, who was left with less than two big blinds and was eliminated in third place.

Stacks were almost level heading into heads-up play with Negreanu holding a slight advantage. Negreanu increased his lead over the early period of play, reducing Tilston to around 20 big blinds. But the American would double, calling a shove from his opponent with trip kings against Negreanu's pair of aces.

However, back came Negreanu who opened up a gap once more between the two opponents.

The river put four spades on the board and Negreanu called a third time for 6,500,000. Tilston held the ten of spades, pipping Negreanu's nine of spades to take down the pot.

Four hands later, Negreanu was all in and ahead with ace-deuce against queen-jack. Negreanu looked set for a sixth double up until the jack hit the river, deflating the packed rail and handing Tilston his first-ever bracelet.

While this tournament has concluded, there's more coming from the 2019 World Series of Poker. Click here for live updates from the 2019 WSOP Main Event, or click here for an overview of all events that are currently going on in the Rio All-Suite Hotel and Casino.