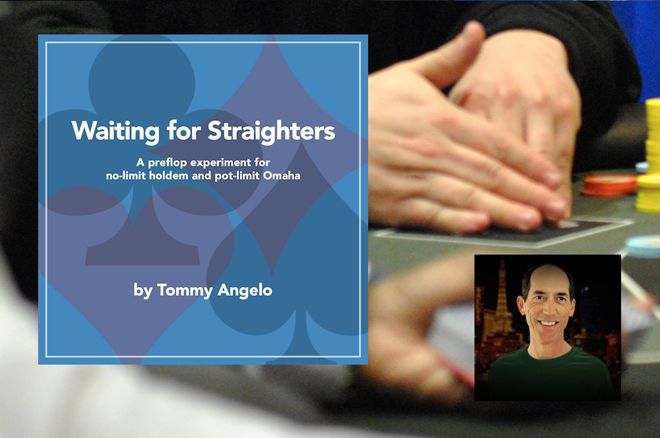 Tommy Angelo is one of the few poker writers who needs no introduction. For over 20 years, the author of the 2007 classic Elements of Poker has been a boon to players working on their mental game through his books and articles, his coaching, and his strategy columns on PokerNews.

Angelo recently turned his attention to preflop hand selection in a new, short work titled Waiting for Straighters: A Preflop Experiment for No-limit Hold'em and Pot-Limit Omaha. Coming in about 10,000 words, the "experiment" is somewhere between a slim book and a long article. Here's what you can expect.

Waiting for Straighters in No-Limit Hold'em

You're first to act. You're in middle position facing a raise from an opponent in early position. You're on the button after four limpers. Although we make these preflop decisions over and over, it's easy to forget the core principles that govern them. For instance: What's the worst starting hand in hold 'em? Pause for a moment and think.

Angelo found an answer after talking to the legendary Bobby "The Wizard" Hoff. Hoff was born in Victoria, Texas in 1939 and attended the University of Texas in 1958. Three years after graduating, he moved to Las Vegas and spent several years as a dealer, a poker player, and a blackjack hustler. Eventually Hoff roamed the country with other famed Texas road gamblers such as Doyle Brunson, Carl McKelvey, and Bryan "Sailor" Roberts.

"It's not about how good you play," Hoff once told Angelo. "It's about how bad they play." Here was a lesson about game selection and, more subtly, about the dangers of pride. More to the point, Hoff declared that the worst starting hand in no-limit hold 'em is A-9-offsuit.

Hearing these words, something clicked. The Wizard highlighted the same preflop line in the sand that Angelo himself had discovered: the difference between three-gappers and four-gappers or, in Angelo's terms, between straighters and non-straighters.

"With a straighter, you can clandestinely draw to a hand that will beat hands that will pay off," Angelo says. On the flip side, by folding non-straighters, you can avoid being put in the same difficult spot yourself.

At a $5/$10 NLHE table, for instance, the cutoff raises to three times the big blind. Holding

on the button, you might fold, call, or raise, depending on a number of factors — stack size, game flow, your opponent's image, your own image, and so on.

"I used to maybe play

in this spot," Angelo says. "But now I always fold."

Waiting for Straighters in Pot-Limit Omaha

A hand that can flop a straight. That's a simple enough definition of a straighter in no-limit hold 'em. Defining a PLO straighter is bit trickier.

One advantage of flopping a wrap is that you can comfortably commit all of your chips in order to see all five cards. The value of a wrap, in other words, isn't only about equity; it's also about equity realization. 9-8-7-5 will see the river more often than a hand like Q-J-7-5, which gives 9-8-7-5 additional value beyond only its straight-making potential.

Playing $5/$10 PLO, you're in the small blind. Under the gun limps and it's folded to you. You glance left and can see that the big blind isn't going to raise. Which hands should you play? "With

Angelo's discussion of straighters incorporates crucial advice from Elements of Poker — the importance of position. Acting last, he says, is like drinking water: we don't have to understand why it's good for us to know that it is.

"Here's my approach to playing NLHE and PLO," Angelo says. "I know from experience that if I act last on way more streets than the opposition, I'll make enough money to live on. So I fold a lot preflop from the blinds and the early seats, and after the flop, I give up sooner than most when I'm first to act and I whiff. The result is that I am last to act on about 80% of the streets I play. It's such a huge edge that sometimes it feels unfair."

Waiting for Straighters won't transform you into an expert player. It doesn't directly address postflop play. But it does provide a firm foundation (for beginners) or a useful reminder (for veterans). Wait for straighters. Play hands in position. Taken together, these two rules can make turns and rivers easier to play and, as part of the mental game, reduce uncertainty and tilt.

Waiting for Straighters by Tommy Angelo is available now in a variety of formats including as an e-book, an audiobook, or over the web.