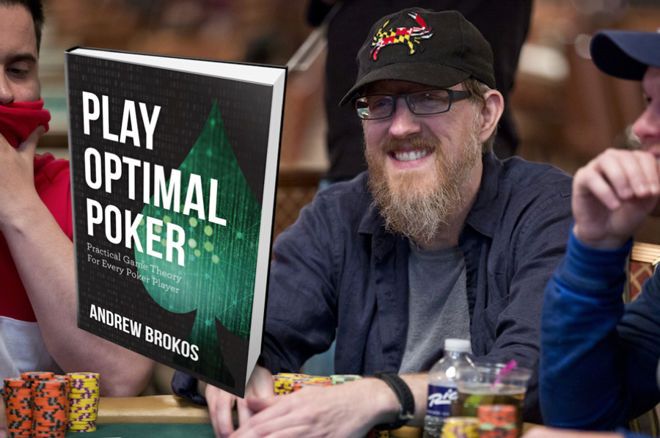 As a poker pro for over a decade, Andrew Brokos had carved out a nice life for himself. He enjoyed success on the live and the online felt, co-launched The Thinking Poker Podcast, and grew an impressively scraggly beard. And yet, however much he discussed hands or studied ranges, he never quite felt that he knew the "right answer." He craved certainty.

His quest for firm footing eventually led to game theory. Although it doesn't exactly offer an escape from uncertainty, game theory taught Brokos that he could use uncertainty to his advantage. "Now, when I play poker," he says, "my objective isn't to play tight or to play circles around my opponents or even to win money. My objective is to give my opponents difficult decisions, to put them in spots where they have no idea what the right play is."

Play Optimal Poker: Practical Game Theory for Every Poker Player, a 237-page primer in practical game theory, equips readers to make better decisions under conditions of uncertainty. Ultimately, Brokos argues, understanding game theory will make you more comfortable at the poker table. It will help you to exploit weak opponents and to hold your own against strong ones. It might even spark creativity.

A Genealogy of Game Theory

Brokos begins with John Nash, the Princeton mathematician whose "Nash equilibrium" revolutionized economics and the social sciences. Nash proved that in any game where a finite number of players each has a finite number of choices, there is at least one set of strategies that guarantees the best possible payoff for everyone. In other words, as the economist Samuel Bowles once put it, there's always "a situation in which everybody is doing the best they can, given what everybody else is doing."

Ever wonder how to negotiate a Friday night out with your partner or how to avoid paying a lender? Through real-life scenarios like "Going to the Movies" and "Dodging a Debt," Brokos illustrates the game theoretical concepts of equilibrium, strategy, equity, and expected value.

Next he introduces two-player "toy games" whose principles apply to poker. Readers of Bill Chen and Jerrod Ankenman's Mathematics of Poker will recognize "The Clairvoyance Game," which illustrates the interplay between a polarized range (only strong and weak hands) and a condensed range (mostly middling hands or "bluff-catchers"). These early chapters also include a discussion of sophisticated programs called "solvers" that are able to approximate equilibrium solutions for actual poker situations.

Given his interest in optimal play, you might think that Brokos aspires to be the bearded incarnation of PioSOLVER. But no. "The point of studying game theory," Brokos writes, "is not to approximate equilibrium solutions whenever possible; it is to know roughly what an equilibrium strategy would look like so that you can make wise adjustments when you have the right information to do so and avoid opening yourself up to exploitation when you don't."

About halfway through the book, Brokos turns to the "practical" side of game theory: exploiting opponents who seem to be deviating from equilibrium. This approach is risky. That's because whenever you deviate from equilibrium in an attempt to exploit an opponent's tendencies, then you might be exploited. But the gamble is often worth taking.

"My philosophy is, 'A bird in the hand is worth two in the bush,'" Brokos says. "I usually take an exploitative opportunity when I see one and then do my best to anticipate the consequences of that decision, in terms of how my opponent perceives me and how he'll play against me going forwards."

In order to integrate reads with decision-making, Brokos suggests a four-step exploitative process:

Broadly speaking, envisioning the equilibrium means asking: How would this hand play out if my opponent and I were replaced by game theoretically optimal supercomputers?

More specifically, it means potentially asking several different questions: Which player should be more inclined to bet? What kind of range should each player bet? Which are the best hands for each player to value bet? If I bet, what should my opponent's raising range look like? What are the weakest hands with which my opponent ought to commit his entire stack?

After you have a sense of what your opponent's equilibrium strategy ought to look like, Brokos says, it will be easier to determine how she might be deviating from equilibrium. Once again, it's important to make a specific read. For example, "He's calling too often with pure bluff-catchers on the river," is more useful than "He's too loose," or "He's a fish."

The next step is to identify an exploit. If an opponent doesn't bluff enough on the river, for instance, then you might fold your bluff-catchers when he does bet, or you might call more turn bets with bluff-catchers, assuming that your timid opponent isn't likely to pressure you on the river.

All right. You've decided to exploit your opponent by folding more bluff-catchers on the river. But how much more often? Should you fold a few hands or every hand except the nuts? Factors to consider include the size of your opponent's mistake, the amount of confidence you have in your read, and how your two cards interact with the board and your opponent's range.

"Having a sense of how close a decision would be at equilibrium will help you to determine how strong of a read you need to have or how large of a mistake you need to anticipate to warrant an exploitative adjustment," Brokos explains.

The book works cumulatively, prompting readers to answer sample questions and moving chapter-by-chapter through increasingly complex, poker-centric scenarios. In the "Ace-To-Five Game," players have a wider range of cards with which to value bet or bluff. Another chapter discusses how equilibrium strategies change when players have the option to raise. The final chapter, "Putting it All Together," includes a summary of exploits against the following mistakes:

It might be greedy to want more from a book that covers a tremendous amount of ground. I would have appreciated a discussion of multi-way pots, even if the equilibrium strategies for these situations aren't fully known (most solvers can only process heads-up confrontations). All in all, though, it's tough to overstate the potential value of this book. I use the word "potential" because, with a topic as challenging as game theory, any payoff will depend a lot upon the reader's effort and a willingness to improve.

Play Optimal Poker is lucid, accessible, and successfully bridges the gap between theory and practice. You'll be hard-pressed to find a better guide.

Play Optimal Poker by Andrew Brokos is available now via Amazon either as a paperback or an e-book.