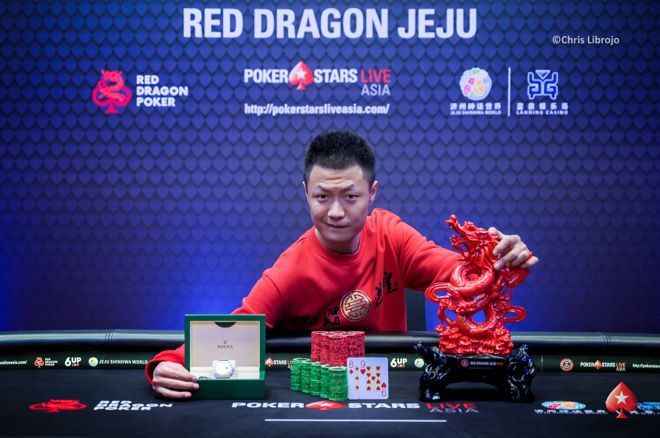 A new dragon slayer has been crowned as the final table of the record-breaking 2019 PokerStars LIVE Asia Red Dragon ₩2,500,000 Main Event has come to the conclusion in just five hours of play. Zhihao Zhang entered the final day with 45 percent of the chips in play and never relinquished the top spot, however, he did cut a deal with Ting Yi Tsai prior to the heads-up duel.

The 869-strong field was made up of 487 unique entries, drawing players from 20 different countries with China (76.6%) making up the largest portion of the field with 373 unique entries. Japan (7%) was the next best-represented nation, with 34 unique entries, followed by Taiwan (4.3%) with 21 unique entries.

*reflects deal of the last two players; they played for the trophy, Rolex watch and ₩15,370,000 to the winner

A Rolex for the Winner

It was the second Red Dragon Main Event cash for 28-year-old Zhang, who hails from Xi'an in northwest China where he works for the family business. Back in January 2014, Zhang finished in 33rd place for a payday of HK$ 38,000 and mainly plays in Chinese-based poker tournaments.

"When playing Texas Hold’em you still need some luck, we all made it this far so I believe we [the players] all had similar levels of skill, it’s just because of my big chip advantage from Day 3," Zhang pointed out in the interview after his victory via the aid of a translator.

On top of the unique Red Dragon trophy and the six-figure prize money, Zhang also received a luxurious Rolex Submariner Date watch in Oystersteel worth USD$20,000, exclusively sponsored by 6UP – the official partner of PokerStars in Asia.

When asked what his strategy for the final table was, Zhang had the following to say.

“For my strategy coming into the final table, you must play aggressively and try and gain an advantage.”

His major advantage right from the bat was a commanding lead with nearly half of the chips in play after he had dominated the late action on the previous day to become the odds-on favorite to win the tournament. While he remained very focused and picked the spots during the early stages, that definitely changed during short-handed play.

The heads-up duel for the title, trophy, and glory lasted all but seven minutes as a three-bet pot saw Zhang with a gutshot against top pair and he hit the perfect turn card to leave Tsai drawing dead when all the chips went in.

Also featured on the final table were Yifan Cao, Rongshan Li, and Zhenhua Lu, who had reached his second Red Dragon final table in as many years.

Three Quick Eliminations at the Start

The final table started with a very distinct distribution of the chips and in the matter of one hour, the field was reduced to the last six hopefuls already. A few minutes into the final day, Wenyan Liu ended up second-best with ace-jack suited against the ace-king suited of Ting Yi Tsai and found no help on an eight-high board.

Only five minutes later, the hopes of Zhenhua Lu to better his fourth-place finish from last year in Macau vanished when he flopped second pair with eight-seven in a battle of the blinds against eventual champion Zhihao Zhang. He got it in after the turn and Zhang c called with jack-deuce for flopped top pair.

"You must play aggressively and try and gain an advantage."

The third casualty on the final table was Dapeng Wang, who never managed to build his stack. Eventually, he called the shove of Cangsheng Ni with pocket eights and found himself dominated by the pocket jacks of Ni.

It didn't take long to reduce the field further as Rongshan Li lost the race against his short stack and bowed out in 6th place. He busted against Yifan Cao, who then became the next player to bust.

After cruising to a comfortable second place early on thanks to a knockout and winning a pot against Zhang with ace-high, Tsai hit a rough patch when there were five players remaining. His ambitious three-bet against Zhang was shot down and right after he was all-in and at risk with pocket eights against the pocket aces of Cangsheng Ni. One card away from being sent to the rail in 5th place, Tsai spiked his two-outer on the river and was right back in it.

Ni then doubled through Zhang with turned set against flopped top two pair and Xin He lost a flip with pocket nines against the ace-queen of Zhang to reduce the field to the final three players. Once they returned to their seats, it was a brief affair to set up the duel for the title as Tsai came out on top with ace-jack against the king-ten suited of Ni.

The deal negotiations between Tsai and Zhang and subsequent break before returning to their seats took longer than the battle one-versus-one as seven minutes were all it took in order to determine a champion. In a three-bet pot, Tsai flopped top pair with king-jack suited and Zhang had a gutshot with eight-seven. The turn completed the straight and the chips went in, Zhang already celebrated with his rail even before the meaningless river was dealt.

That wraps up the PokerNews Main Event coverage, but several other events are still running at the festival in Jeju such as the final day of the Baby Dragon, the Anniversary event and the first day of the ₩10,000,000 Super High Roller.