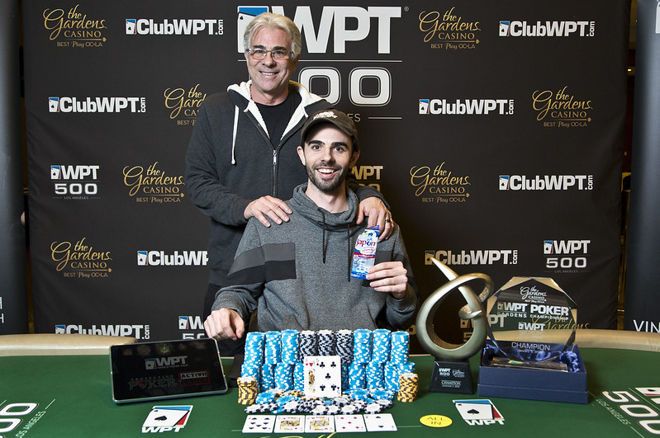 Griffin Paul grabbed a small bit of World Poker Tour history and a large bit of cash earlier this week in California.

Paul topped a field of 2,310 entries to win WPT500 Los Angeles for $174,850. It's Paul's second piece of WPT hardware, as he's also a main tour champion from winning WPT Seminole Hard Rock Poker Showdown back in 2015. Craig Varnell is the only other player to accomplish the double.

The event, hosted by The Gardens Casino, ran across several weeks in December and January. It offered unlimited entries through 16 starting flights, building the prize pool up over $1.1 million.

Many players cashed on Day 1s, with only 5% of each field bagging. Among those who made into the Day 2 paid places were Nick Pupillo, Matt Salsberg, Kate Hoang, Nathan Bjerno, Gal Yifrach and Jared Griener.

Paul went into the final table with more than 10 million at 75,000/150,000/150,000, well clear of everyone in the field except Bradley Hinson, at 9.3 million, according to the live updates. However, Hinson would surge past him with an early double knockout when his aces held against players shoving with

Paul then called a sizable shove of almost 23 big blinds from Tim Tang with king-queen and was able to hit a queen on the river against ace-five. His hot run continued when he turned a wheel blind versus blind against Hoang Le, who had flopped top two pair. Le couldn't fill up and Paul went heads up against Hinson with a sizable lead.

. Paul check-called then came out betting with 1.2 million on the

turn. Hinson stuck around then shoved over a river bet of 3.7 million for 7 million more after the

for two pair, as Hinson had missed a draw with

"I didn't really have too many setbacks, it was all pretty smooth," Paul told WPT reporters.

A $1,500 Gift From His Highness at KingBilly Casino