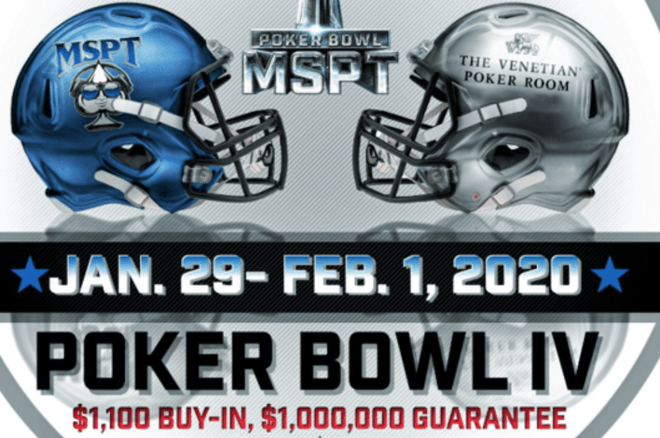 For the fourth year in a row, the Mid-States Poker Tour (MSPT) and The Venetian in Las Vegas are joining forces to offer a tournament over the NFL’s Super Bowl Weekend.

The $1,100 buy-in Poker Bowl IV will feature a $1,000,000 guarantee and offer three starting flights. Day 1a will take place at Noon local time on Wednesday, January 29, while Day 1b & 1c will take place at the same time on Thursday, Jan. 30 and Friday, Jan. 31 respectively. The surviving players from both flights will then return for Day 2 at 11 a.m. on Saturday, Feb. 1 and play down to a winner.

That ensures players will be free on Sunday so they can enjoy Super Bowl LIV, which is being held on February 2 at Hard Rock Stadium in Miami Gardens, Florida.

The entirety of the tournament, which will feature 40-minute levels and start players with 20,000 in chips, will be live reported by PokerNews.

Here’s a look at the entire Poker Bowl IV schedule including satellites:

History of the MSPT Poker Bowl

Last year’s event, which attracted 1,022 runners, it was Brian Wilson of Ontario, Canada, taking home $143,929 after a three-way deal.

“For the seventh year in a row, the MSPT will return to the Venetian Las Vegas,” said MSPT President Bryan Mileski. “Each year only seems to get bigger and better, and we’re expecting that to continue in Season 11 beginning with the Poker Bowl IV. Unless you’re at the game itself, there’s no better place to take in the Super Bowl than in Las Vegas.”

The MSPT Poker Bowl IV is a part of The Venetian’s 2020 Deepstack Extravaganza Poker Series, which runs from January 27 through March 1 and will offer $3.3 million in guaranteed tournament prize pools.

29 Best Gambling Movies to Watch Before You Die (Updated)