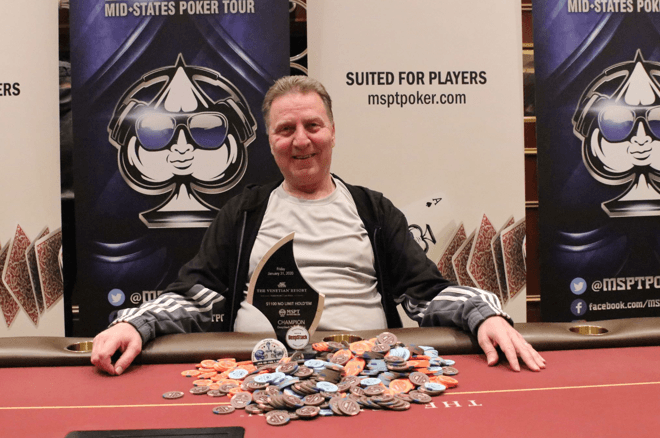 The fourth edition of the Mid-States Poker Bowl (MSPT) $1,100 buy-in Poker Bowl at The Venetian in Las Vegas featured a $1 million guarantee, and a massive turnout of 1,093 entries over three starting flights resulted in a $1,060,210 prize pool.

On Saturday night, the day before the NFL Super Bowl LIV between the San Francisco 49ers and Kansas City Chiefs, a winner was crowned in the MSPT Poker Bowl IV after Bob Whalen began as the Day 2 chip leader and rode it to victory after a five-way deal was struck.

Whalen, formerly from Wisconsin, has lived in Vegas for the past three and a half years playing about town nearly every day of the week. However, it wasn’t his first taste of victory at Venetian as ten years ago he won three DeepStack tournaments within a two-week span.

MSPT regular Kou Yang was the first final table casualty after running pocket fours into Justin Young’s sixes, and Eyal Al Revah followed him out the door after committing his short stack with king-ten suited only to see Grachia Minasian roll over pocket aces. Revah flopped a flush draw but bricked the turn and river to fall in ninth place.

The short-stacked Vadim Shlez was next to go after losing king-ten to Young’s ace-queen all in preflop, while Young himself bowed out in seventh running pocket tens into George Brady’s two black jacks.

Next on the chopping block was John Dennehey, who lost holding jacks to Minasian’s ace-nine after the latter made a straight on the river. At that point, the final five players paused the clock to discuss a deal. They came to terms, and as the chip leader, Whalen was crowned the Poker Bowl IV MVP taking down his first MSPT title.

Season 11 of the MSPT continues February 21-23 with a $1,100 buy-in, $300K GTD Main Event at Minnesota’s Canterbury Park. Once again PokerNews will be on hand to capture all the action. For more information visit msptpoker.com.

Why Castle Builder Is The Best Online Slot You'll Ever Play

Balls of Fury: It's Time for Some Furious Fun!