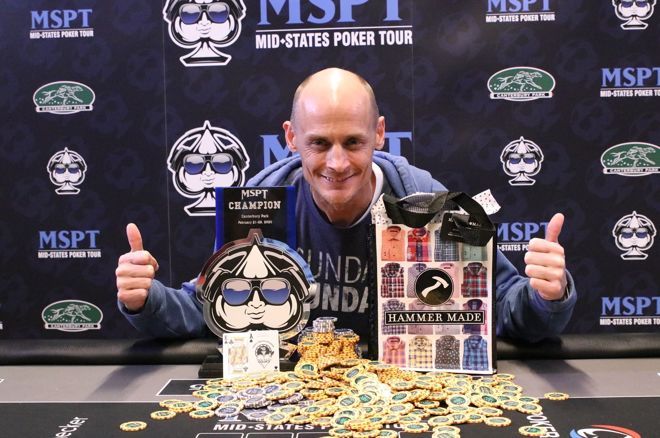 The Mid-States Poker Tour (MSPT)’s first stop of four at Canterbury Park in 2020 saw 485 entries logged over two initial starting flights with 66 players returning Sunday for an 11 a.m. start time with their eyes set on the top prize of $100,824. Nearly 13 hours later, a champion emerged in Minnesota’s own Derek McMaster, who scored the second six-figure cash of his career after winning a WSOP bracelet in the summer of 2019.

Three-time MSPT Champion Blake Bohn finished in 11th place and was inducted into the MSPT Hall of Fame at the event. Bohn officially earned his way in on Sunday when he locked up his 25th career cash on tour, doing so with a flare after he called the short-stacked Kevin Kelly's all-in shove on the bubble. Kelly had ace-jack and Bohn had king-five. Bohn hit a five on a three-spade flop and ended up holding against Kelly’s nut flush draw to secure his score and his place in the MSPT Hall of Fame.

Bohn’s MSPT history dates back to 2011, and he has now amassed over $500,000 in earnings on tour to accompany his three first-place finishes on the tour.

Play resumed with 29 minutes left on the clock in Level 15 after a hard stop was reached on Day 1a due to 12% of the field remaining. Only 54 of the returning 63 players would get paid, and that number was reached roughly 90 minutes into play for the day. The bubble lasted for around 20 minutes and fueled a frenzy of eliminations shortly thereafter, with players such as Sammy Aweida, Jesse Rockowitz, Joe Ebanks, and Andy Tran all earning first-level payouts within minutes after the bubble burst.

From there, an hour and a half went by before the final three tables were reached. Chan Pelton, Aaron Johnson, and Day 1b chip leader Jeremy Dresch were among those amassing stacks at different points in time, but all three ultimately fell short of the final table with Pelton taking 19th place, Dresch 14th, Johnson 12th and now-Hall of Famer Bohn, as mentioned before, in 11th place.

Dedric Henderson entered the final table with a stack of 2.53 million, well ahead of the rest of the field. Play started slow until Henderson knocked out Day 1a chip leader Brandon Waalen in a hand where Waalen shoved pocket deuces into Henderon’s kings. Moments later, Phil Mader hit the rail after his ace-king lost to McMaster’s pocket jacks. Mader flopped a king but the ace on the river that gave him two pair filled McMaster up to Broadway, leaving just seven left in contention.

McMaster found himself over 2 million after knocking out Mader and picked up roughly another million 45 minutes later when Dennis Stevermer’s king-nine suited ran into his pocket kings to send him home in seventh place. Another full level of play then went by before McMaster struck again, knocking out Kevin Boyer in sixth place after his ace-king held versus Boyer’s ace-jack suited.

Five-handed play went on for another 40 minutes and the beginning of Level 30 saw just over 100 total big blinds in play with five still remaining. Despite Umut Ozturk, Nathan Fair, and Daniel Hendrickson all being short, the two big stacks in McMaster and Henderson traded a few blows. Henderson caught McMaster bluffing and regained the chip lead momentarily until the two got stacks in on a queen-high flop with McMaster’s holding two nines against Henderson’s pocket sevens.

Moments later, Fair shoved with nine-eight into Ozturk’s ace-king and got there, leaving Ozturk on fumes. He found the rail a hand later, and Fair looked as if he were going to make a run as Henderson shoved king-queen into Fair’s ace-queen to take fourth place shortly thereafter.

However, three-handed play only lasted for a few hands before Fair got it all in with eight-seven on an ace-nine-seven flop in a blind-on-blind battle against McMaster. McMaster looked him up with kings and held to take the match heads up, where Hendrickson shoved king-five into his ace-king just one hand later to seal the deal.

That's it from the first MSPT stop at Canterbury Park in Shakopee, MN. Make sure to check back to PokerNews for the next stop of the popular tour on March 20-22, 2020 in the Meskwaki Casino in Tama, IA