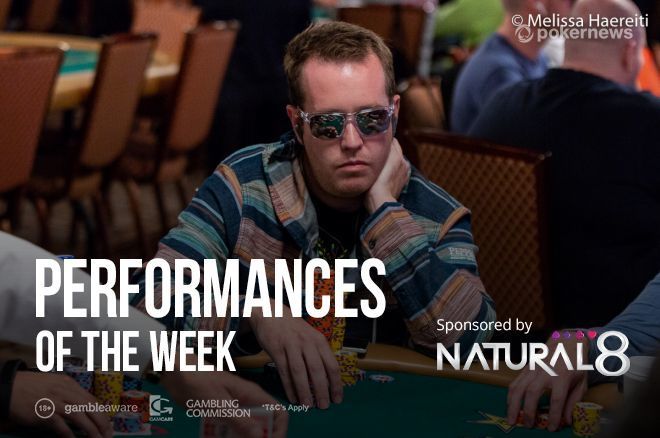 Each week, we’ll highlight those players who rise to the top through their performance, be it a dominating one in a single event, or an exhibition of consistency over several tournaments.

Prior to the 2020 WSOP, two-time circuit ring winner Shawn “SayGoodnight” Daniels was an accomplished player on WSOP.com. In fact, both of his rings came from online events, the first after he won the 2018 WSOP.com Online Circuit $525 Main Event for $83,545, and more recently last month when he won the WSOP.com Season Finale Circuit $1,000 High Roller 6-Max for $75,034.

That made him an early favorite to have success in the WSOP.com bracelet events, and he didn’t disappoint making two final tables in the first week.

flop gave Daniels flush and straight draws. Unfortunately for Daniels, he bricked the

river, eliminating him in fourth place.

Fireworks on the 4th of July

A few days later on July 4th, Daniels was part of a 1,179-entry field in Event #4: $500 No-Limit Hold’em Super Turbo, which featured six-minute levels. He would go on to become the first player of the series to make multiple final tables, although he did it by entering as the short stack.

Daniels primed to double, but not after the

river helped Daniels and he had to settle for eighth place.

Had he won that hand, who knows what might have happened? Regardless, making two final tables in the first week was worthy of Natural8’s “Performance of the Week.”

At the beginning of the month, Iowa’s Matthew “Michmeister” Mich had just $3,344 in live tournament earnings, nearly half of which came from two small WSOP cashes, one in 2018 and the other in 2019.

“He was only planning on being out here a couple weeks, but now I think he might stay with me and chase the leaderboard,” Howard said of his friend.

Mich was one of the early breakout performers of the online series.

'It Would Have Changed the Game' -- An Oral History of Chiptic, Part 1