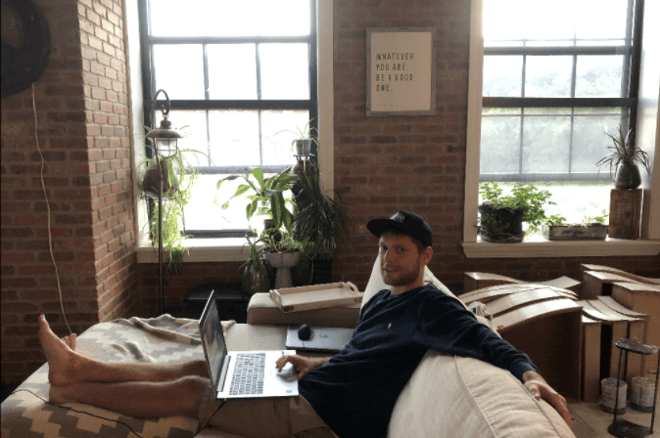 Over the course of two days on July 9th and 10th, the poker world witnessed New Jersey’s Ryan “im.sorry” Torgersen accomplish a truly incredible feat. First, he navigated his way through a 1,026-entry field in Event #9: $1,000 NLH 6-Max only to finish runner-up to Ron “MacDaddy15” McMillen, good for $116,379 prize money.

Little was known about poker’s latest breakout star, who was awarded Performance of the Week right here on PokerNews. Fortunately, he found time in between his online grind to chat with us.

His Rise to Online Prominence

The 30-year-old Torgersen grew up in Granby, Connecticut with his parents and younger sister.

“I do not have much work experience besides a few delivery jobs I had in my mid 20's before I got back into poker and moved to Jersey,” he said. “I spent a couple years in college studying economics but was spending too much time playing poker. I did not want to go to college in the first place, right after I graduated from high school, but I did it because it was expected of me.”

"After years of experience and studying cash games/sims I realize there will always be so much more room to get better."

As it turned out, the education he’d use to capture WSOP gold came years earlier courtesy of his father, who taught him how to play poker.

“My dad taught me the rules of poker at a pretty young age before I found PokerStars during the poker boom,” Torgersen explained. “I taught myself, originally by spending hours watching all the top tournament players from the PocketFives and Pokerstars TLB every day, figuring out how they would play different stack sizes, then just put it into my own game and saw good results pretty quickly.”

He continued: “Back then, I thought I was the best in the game and knew all there was to know, but after years of experience and studying cash games/sims I realize there will always be so much more room to get better and I'll never know it all no matter how much I study.”

Making a Living at the Game

For the past few years, Torgersen has been playing 6-max cash online professionally on New Jersey’s various sites.

“I started out as a struggling $0.25/$0.50 player just getting by and didn't really start to see the fruits of my labor until 2019 when I was able to save a little more money and move up in stakes faster,” he explained. “I did grind live for half a year or so at Foxwoods while still living in Connecticut, but I find it easier and more profitable online being able to multi-table and get through hands faster.”

"I still haven't had the chance to fly out to Vegas for the series every poker player wants to play, the WSOP."

Like so many others who play online, the wider poker world really wasn’t aware of them because of the lack of live play. For Torgersen, his live experience boiled down to a few East Coast spots like Foxwoods and Borgata. Ironically, the recent bracelet winner has never been to Vegas for the WSOP.

“That's the majority of my live experience other than big tournament series offered in the Northeast a couple times a year, but I still haven't had the chance to fly out to Vegas for the series every poker player wants to play, the WSOP,” he said. “Maybe now, after the recent success I've had I'll finally be able to, if Covid-19 ever settles down.”

As for his WSOP.com online screen name, Torgersen explained: “When I was making my account I just had a feeling I was going to go on a crazy run and possibly win a couple of online bracelets. I wanted to apologize to anyone who might feel a little jealous ahead of time [Laughs]. There's no story really, I have a different name for each site I play on right now and ‘im.sorry’ is just what came to mind when making my account.”

In his back-to-back final tables, Torgersen began each on the shorter side of things.

“During the first night I was pretty thrilled with each pay jump as people were getting out before me, the emotions really started to set in when there were 3-4 players left as it became the biggest cash of my career and I had a stack to take it down for a bracelet,” he said.

“I was trying to focus and not get too emotional but I was still pacing around my room from hand to hand. It's always a little disappointing getting second, especially with the pay jumps as big as they are and the chance to win a WSOP bracelet so close, but I was happy with the way I played and can't complain with a $116K payday.”

Fortunately for Torgersen, he didn’t have to live with the feeling of coming up one spot shy of a bracelet for long, though it almost didn’t come to pass.

"Once I was there I decided to just go for the bracelet and take every situation I thought was winning chips regardless of the pay jump implications."

“The next day was a Friday and I was actually close to taking the day off to celebrate with my friends,” Torgersen admits. However, he decided to play the Monster Stack while having drinks with friends. At one point, he was short and went to his room to await his elimination.

“I was really short stacked the whole tournament and exhausted from the night before,” he explained. “That inevitable bust out never came though, and I eventually found myself at the final table again. Once I was there I decided to just go for the bracelet and take every situation I thought was winning chips regardless of the pay jump implications. I can't downplay the luck it took though, some of the runouts at that final table were insane and coming top two in back-to-back tournaments of that size is surreal.”

So, after two long nights, two big paydays, and a WSOP bracelet, what did Torgersen do (after he got some sleep of course)?

“I celebrated a bit with my friends in town here and took the night off Saturday,” he revealed. “I’m trying to plan a vacation once this series is over with more people, other than that I don't have any plans with the money yet … I have a lot to figure out once all this is over, this is a lot of money.”

As for his upcoming plans, Torgersen will play the remaining tournaments throughout July in the hope of adding either another deep run or bracelet to his résumé and ideally win the 2020 WSOP.com Leaderboard, where he currently sits in third place.

Of course, PokerNews will be there every step of the way to see if Torgersen can do it again!