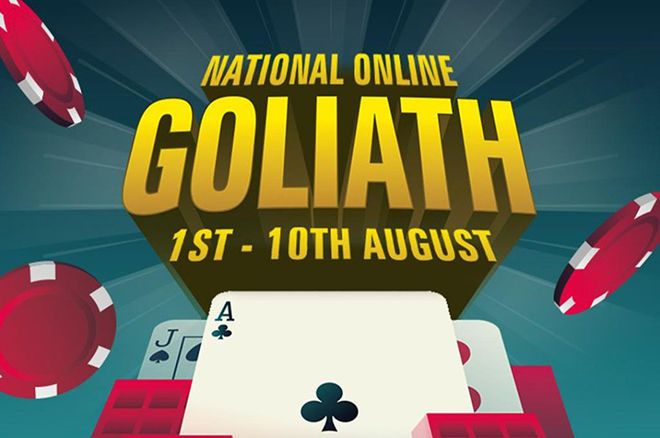 Grosvenor Poker is the place to be if you want to play in this year’s edition of the massive Goliath tournament. The Goliath is one of the most eagerly anticipated live events of the year, but with Prime Minster Boris Johnson only recently giving the green light for casinos to reopen, Grosvenor Poker has moved the Goliath online.

Grosvenor first ran the Goliath back in August 2011. Some 1,765 players bought in for £120 and were all outlasted by Lee Rawson who banked an impressive £32,705. The event has grown every year since its creation to the point an incredible 9,300 players competed in 2019, making it the largest live poker tournament run outside of Las Vegas. It ended in a five-way chop that saw those five player share almost £340,000!

This will be the first year the Goliath hasn’t grown, but it will still be massive because Grosvenor Poker has slapped a £100,000 guarantee on the prize pool.

Read all about the record-breaking 2019 Goliath

Players are permitted to re-enter up to five times while late registration is open, meaning it is definitely worth your time entering the plethora of satellites that start at only £0.25 to see if you can arm yourself with more £125 bullets.

The 2020 Goliath is part of a festival running from August 1-9. It features 15 value-packed events ranging from only £5 and up to £560. Add the guaranteed prize pools together and you come to more than £300,000 across those 15 tournaments.

You’ll find the online version of Grosvenor’s extremely popular 25/50 event, and a £50,000 guaranteed High Roller event that is sure to attract some of the best poker players in the business.

Speaking of which, Team Grosvenor will be out en masse hoping to help themselves to a massive score or two. Look out for Joe Beevers, Andy Hills, Katie Swift, Rick Trigg, and Jeff Kimber, plus the recently signed former World Champion boxer the one and only David “Hayemaker” Haye.

Send your bankroll into orbit with satellite MTTs

Will You Become the Player of the Series

Grosvenor Poker is adding £2,000 in prizes for the top 10 players in the Goliath Tournament Series. You earn points for every Goliath tournament you play, from 10 points just for playing up to 100 points for becoming a champion. All points from the Goliath Main Event are doubled, making it even more important to win.

The top points earner earns the title Player of the Series and gets their hands on £1,000 worth of tickets. This consists of:

Grosvenor Poker and PokerNews are joining forces throughout the Goliath Tournament Series and we’ll be providing live coverage from the £100,000 guaranteed Main Event.

The Goliath tournaments are only available at Grosvenor Poker so why not head there now and create yourself an account?