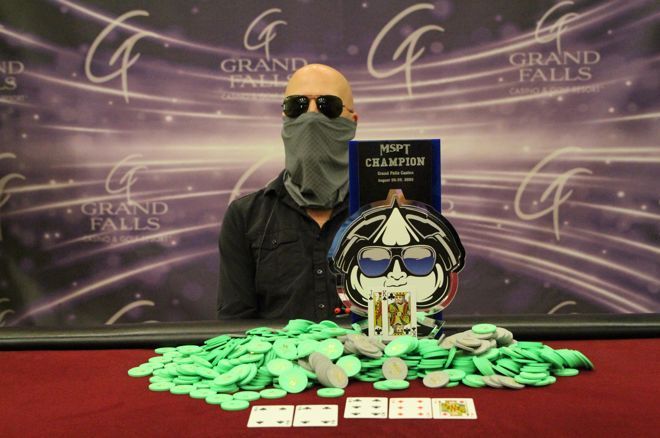 To say the Mid-States Poker Tour (MSPT) Grand Falls Casino $1,100 buy-in, $150K GTD Main Event crushed it would be an understatement. The first live mid-major poker tournament in the United States in nearly six months attracted 518 entries (226 from Day 1a; 292 from 1b), which not only surpassed the venue’s previous best field of 238 entries in 2015 but also became the largest major ($1,000+ buy-in) in Iowa history.

While Grand Falls Casino is situated just outside Sioux Falls, South Dakota, it is technically located just across the border in Larchwood, Iowa. Despite being a bit remote, players flocked from the Midwest as well as Colorado, Florida, and Vegas. The turnout was evidence that, despite the current pandemic, there is a big demand for live tournament poker.

On Sunday, 67 players returned for Day 2 action, and after it was 47-year-old Mark Collins, a systems administrator from the St. Louis area, coming out on top to win the $107,706 top prize and his second MSPT title. He previously won the MSPT Season 9 Canterbury Park for $102,076.

It was a triumphant return to live poker for Collins, who hadn’t played since January. He rarely travels to play to the game, but like so many others had the itch.

With 54 slated to get paid, more than a dozen players needed to exit before the money was made. Among those to leave empty-handed were Howard Hankin, Michael Berk, and Ben Keeline, just to name a few.

At the final table, Steve Wilkie and Mark Collins, both former MSPT champs, navigated their way to heads-up play after beginning fourth and eighth in chips respectively. Wilkie added to his stack by using aces to dispatch Jimmie Lucero, who had ace-seven, in eighth place, while Collins busted former MSPT champ Max Havlish in seventh in a blind-versus-blind short-stack hand.

Collins then doubled into the chip lead when his ace-king held against the ace-queen of Tom Sundling, who exited a short time later in fifth place.

Kevin Berthelsen then eliminated Jason Reisdorfer in fourth before following him out the door in third place, the result of losing a flip with pocket eights to Wilkie’s ace-queen. Heads-up play began with Collins holding a very narrow lead over Wilkie, and the duo battled back and forth for awhile.

Eventually, Collins was able to pull out to a decent lead before the two played the final hand. Wilkie three-bet jammed holding queen-jack only to have Collins call with king-jack. Wilkie, who last November won the MSPT Golden Gates for $85,149, failed to get lucky and had to settle for second place and $66,180 in prize money.

Future stops for the MSPT’s Season 11 are to be determined, but hopes are high there will be more live tournaments on tap in 2020. Be sure to check back to PokerNews and msptpoker.com regularly for the latest news.

Check out the brand-new OddsChecker US today