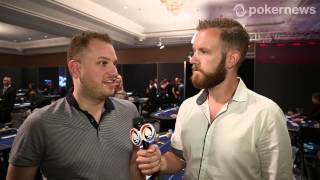 Reinkemeier was born in 1987. He started playing poker back in 2006 as soon as he turned eighteen. He took off with a $50 no-deposit bonus on Party Poker which he received from an online poker training site. Since then Reinkemeier had never deposited any of his own money on an online poker site. He then hit the live tournament circuit in 2007 and immediately won the European Poker Tour event in Dortmund. Reinkemeier cashed just over €30,000 for taking down the €500 Hohensyburg Open tournament.

Before making a decision to drop out of school and concentrate on poker, Reinkemeier was studying economics at the university. Then in 2008 he opted to quit his studies and move to Malta together with his girlfriend who also quit university at the same time. After living in Malta for a year, in 2009 Reinkemeier moved to London, England where he still lives at the moment.

So far Reinkemeier has only one World Series of Poker cash to his name. Although he played ten No-Limit Hold'em events at the 2010 WSOP, he didn't manage to cash in any of them. It was only in 2011 that Reinkemeier had finally cashed in a World Series event taking home €6,913 for his sixth place finish in the €3,000 No-Limit Hold'em Shootout event at the WSOP Europe in Cannes, France.

Reinkemeier cashed a total of three times in World Poker Tour events. His first one was at the WPT Spanish Championship in Barcelona where he placed 23rd in a €5,000 No-Limit Hold'em event and took home almost $12,000 in cash. Then in 2011 Reinkemeier collected two more WPT money finishes. In March he finished runner-up in the WPT Vienna €9,600 High Roller event for just over €100,000 in prize money. Then in December he placed 11th in the WPT Prague €3,200 Main Event collecting €20,000.

It was at the European Poker Tour tables that Tobias Reinkemeier made a name for himself. His first live tournament cash came at the EPT Dortmund €500 Hohensyburg Open event. Reinkemeier won the tournament and took home €30,000 in prize money. Then in 2010 he scored the biggest win of his career by taking down the EPT Grand Final, Monte Carlo €25,000 High Roller event for €956,000. Then two years later he came back to Monte Carlo for the Grand Final and collected an even bigger cash prize. Reinkemeier placed second in the €100,000 Super High Roller and took home €1,064,000 in winnings.

In march, 2008 Reinkemeier won the €1,500 No-Limit Hold'em 2nd Chance event at the Vienna Spring Poker Festival taking home €30,500. Then in July he placed first in the €1,000 No-Limit Hold'em event at the VIP Days in Venlo, Netherlands for €27,000. In January, 2010 he final tabled the Norther American Poker Tour's PokerStars Caribbean Adventure $25,000 High Roller event. Reinkemeier ended up finishing the tournament in sixth place for $108,045. Then in September of the same year he reached the final table in another prestigious event, the Partouche Poker Tour's Main Event in Cannes, France. Reinkemeier placed eighth in that event for €130,700 in prize money. Two years later, in 2012 he finished second in the €10,000 High Roller 8 Max event at the GCOP II Vol. 4/6 event in Rozvadov, Czech Republic. He took home €93,000 in cash.