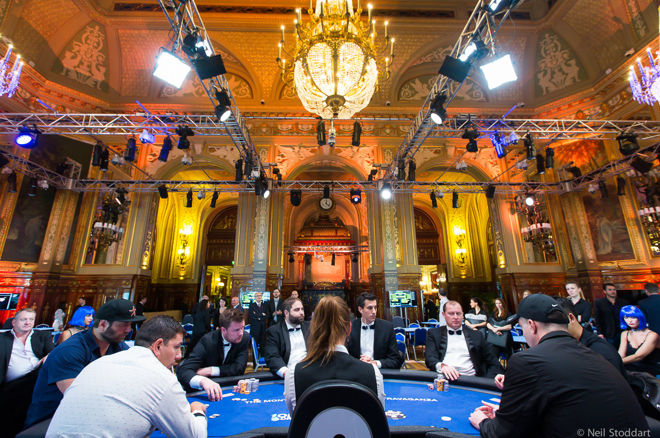 The cold hard truth is that there's is no "one-size-fits-all" strategy for going for the win when at a final table in a multi-table tournament. It is, as always, a case of risk and reward.

If you look at any payout structure for a final table, you'll see that the majority of the cash is in the top three spots. Look closer and you'll see the pay jump between third and first is greater than ninth to third.

That means after having reached the final nine, your goal should now be to become part of the conversation for those top three spots and play for real money. The risk of busting out in ninth to fourth should be more than compensated for by the times you finish first to third.

I recently helped cover the Big One for One Drop final table for PokerNews. Eventual winner Elton Tsang, who came to the final table in second place, had a very clear strategy of going for the win from the very outset of the final table.

Tsang chose to go toe-to-toe with the only bigger stack than him and it paid off handsomely. He took a big chip lead and never lost it throughout the final table as ICM factors meant he was in the perfect spot to take chips from his opponents with very little risk. He had taken a huge risk when taking on the chip leader, and he could've left empty-handed if he had failed, but the reward was the win.

Be it a €1,000,000 buy-in or a $10 tournament, the same principles apply. But you're not always going to find yourself in the enviable position of having the chip lead at the final table, so let's take a look at the poker strategy you'll be employing from a few different perspectives.

What a lovely position to be in. You're the chip leader (or close to it) and as such can put pressure on those less fortunate. If there's a clear short stack (or two), then this strengthens your position.

By now you've hopefully got some information on which players are playing to ladder or are "scared money" and which players are playing without fear. If not, then be observant. If playing live, listen to the players. If you're playing online, then once you've reached the final two tables it can pay to watch the other table and also use online tracking sites such as Sharkscope (if allowed) to work out if anyone is playing at a higher buy-in level than they usually do.

As the big stack you can put pressure on everyone, but the players you should particularly target are those in the middle of the pack as the risk/reward equation for them is skewed towards risk at this stage, and as such they can find themselves "handcuffed."

That's because busting out while there are three or four shorter stacks left costs them significantly, while doubling up doesn't double their equity in the tournament. Therefore, to risk busting they need to be a big favorite. Getting it in for their tournament life as a "coin flip" at this stage is close to ICM suicide.

As always, have a plan and adapt as circumstances at the table change. For instance, the above example is almost an "ideal" situation and it's unlikely that'll always be the case. Often the short stacks might not actually have quite a lot of chips and be able to do damage to your stack. Additionally, it's unlikely the other big stacks are just going to let you run over the table, nor that you'll keep the chip lead throughout.

As play begin to gets short-handed and the pay jumps get bigger, you can use your chip stack as a weapon to leverage opponents' stacks and make them play for all their chips while only risking a smaller portion of yours.

When it comes to deal-making then as a general rule, know that while an ICM chip chop is seen as "fair" it does favor the shorter stack, while a chip-chop deal will usually favor the bigger stacks. See "Let's Make a Deal: 'Chip Chop' and 'ICM' Deals" for more.

As a medium stack who is playing for the win your goal is — obviously — to become a big stack! Now that we've stated the obvious, the key question is how to go about it.

We're not picking on medium stacks in this article we promise, but you should be. Attack those in the same "area code" as you because, as discussed above, they're also in a sticky spot.

The distance between a medium stack and a big stack will differ from final table to final table. Be aware of the gap you need to make up and how much you can hurt those just above you — for example, players who are second or third out of nine when you're in fourth or fifth place.

Get in wrong and you'll find yourself in short-stacked territory quicker than you can say check-raise bluff. But get it right and you'll give yourself a great platform to reach the podium. It's also important to keep an eye on the short stacks and which ones appear to be laddering and which are shove-happy.

When short to start a final table, you need to take risks to get back in the game. With little to lose you can feel comfortable about taking those risks, but you still need to be smart about it.

Shoving light with 12 big blinds into a stack of 100 big blinds is far from ideal, but pull the same move on a stack of 15-30 big blinds and you'll have far more fold equity as you can dent those stacks severely. Double through any of them and suddenly they'll be the short stack not you.

But what about taking on your fellow short stacks? You need to know the player — if they're timid and trying to ladder, then go for it; but if they are like you and trying to turn their short stacks into something more playable, then practice caution.

If no deal has made, then heads-up is where the biggest pay jump and most pressure will be. By now you should have a solid read on your opponent and be able to work out how best to approach the heads-up battle.

Getting heads-up in a tournament doesn't happen too often, so a great way to practice for this scenario is to play some heads-up sit-and-gos. Having heads-up experience under your belt when reaching this stage of the MTT is a great way to increase your edge as you go for the win.

Ready to take a seat at the table? Put these multi-table tournament tips into practice at 888poker room.

2016 WSOP on ESPN: Nearing Final Table, How Would You Play These Hands?