10 Multi-Table Tournament Tips: In the Money 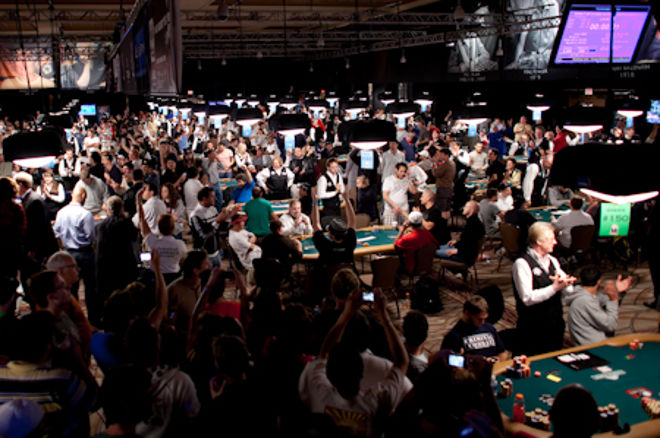 Moving ahead with our series of multi-table tournament tips, we've reached that stage of the tournament when the money bubble has burst but has yet to reach the final table. In large field MTTs this stage could last a long time, with hundreds of players cashing. Meanwhile in smaller tournaments it may only take another table's worth of knockouts or less to get down to the last table.

Here are five suggestions highlighting important considerations during the "in the money" stage of multi-table tournaments.

1. Recognize the Effect of the Payouts

While tournament structures can differ, in most MTTs the payouts only gradually change with each increase as you proceed from a min-cash to the final table, with the larger jumps only happening once you get down to the final few spots.

To point to an example, in this year's $10,000 buy-in World Series of Poker Main Event just over 1,000 players made the money, with a minimum cash $15,000. It wasn't until the field got down to 351 players that those getting knocked out started taking away more than twice the minimum ($32,130). Then much later when it got down to 63 players those being eliminated started cashing for six figures.

The same is usually true for most MTTs — that is to say, the money jumps going from a min-cash to just before the final table aren't usually going to be huge, relatively speaking. That means for much of this period the prospect of lasting to the next money jump shouldn't affect your poker strategy too greatly, or at least not as much as might happen at a final table.

That said, being able to keep your seat as the field continues to decrease is nonetheless crucial, as you obviously cannot get to those big money spots if you don't continue to survive.

2. Ride Out the First Wave of Knockouts

Immediately after the bursting of the bubble, there is usually a rapid rush of knockouts as the short stacks who barely made it quickly switch to double-up-or-go-home mode.

If you're one of these short stacks, do your best to pick a good hand with which to open-push (preferable to calling all in, if you have a choice). Meanwhile, if you have a medium stack or better, this actually can be a time when tightening up is okay to do. Waiting out that first wave of knockouts can often get you a couple of rungs higher on the payout ladder without much risk, but don't get too comfortable.

At some point — often soon in smaller MTTs — the number of players in the "danger zone" (with 5-6 big blinds or less) reduces down to just a couple or even none, and the tournament enters another phase within this "in the money" stage, one in which you better be ready to stay active.

You'll find that a certain percentage of players with medium or even larger stacks will continue to remain tight longer than they should once that first wave of knockouts has finished, still hoping to last through more pay jumps. You can steal blinds and antes here more readily against these players, and push them off hands postflop, too.

As the tournament proceeds towards the final table, the structure determines how often the all-ins will be occurring. Especially in faster-paced MTTs, you'll often find one or two players pushing all in per orbit, perhaps more. If you're above the average or a big stack and pick up strong hands, look for spots to call these all-ins from shorter stacks. In "turbo"-styled MTTs, it becomes a preflop or "long ball" game for the most part, so be smart about your starting hand selection and gather both chips and eliminations when you can.

If the MTT is slower-paced (with deeper average stacks), there will be more postflop poker, although a lot of times players will be more cautious after the flop, checking down hands and not looking for big confrontations without the strongest hands.

For the big stacks, being aggressive during this "in the money" stage is imperative. You have the chips to push around opponents, and they're aware you always have the option to put them "to the test" and force them to make decisions for their tournament lives if they get involved in a hand against you.

When playing hands against your lesser-stacked opponents, recognize at what point in the hand they'll likely be facing a decision whether or not to commit their entire stack.

For short stacks this decision will be before the flop, so don't get reckless and raise them with junk hands you'll have to let go should they push. It's better to be the one pushing against them, forcing them only to be able to play with the highest part of their all-in calling ranges. Against medium stacks the decision will likely come after the flop, where you can semi-bluff with draws or medium-strength hands, or outright bluff them with air if they've shown weakness.

Once the tournament gets down to the last few tables, be aware that you will often be playing short-handed and be ready to adjust accordingly. For example, in a full-ring (nine-handed) MTTs, you'll be playing at tables with less than nine players most of the time as the field shrinks from just over 30 players down to 10. Sometimes — such as when playing online poker — when the tournament gets to 10 players it will play two five-handed tables, where as when playing live you'll usually redraw for a single 10-handed table.

Remember for short-handed play you have to loosen up your starting hand requirements (tight is not right anymore). You also need to change your thinking about hand values postflop — e.g., top pair, medium kicker can be a strong hand after the flop in a short-handed game, whereas it might be more vulnerable full ring. That said, if you happen to hit a monster (e.g., flopping a set or better, turning a straight), you can sometimes get away with slow playing in order to get more chips out of an opponent — though don't get too fancy.

Speculative hands like suited connectors should be less enticing for you when short-handed — you can open-raise before the flop with them if you like, but don't be calling and hoping to hit flops. Aggressive plays both before the flop (blind steals, light three-bets) and after the flop (check-raising, semi-bluffing) will often be rewarded with pots earned without showdowns.

Be aware as well of who else at the table seems to be ramping up their aggression. Often during short-handed play the late position opening raise is even less meaningful than when it is full ring — that's when a three-bet from the blinds (even as a bluff) can be a good play to make.

There are a host of other considerations for this "in the money" phase of multi-table tournaments, but those suggestions should at least get you started as you work on developing the correct approach and mindset to help you do more than just collect small cashes and start reaching final tables.

Like other stages of MTTs, the "in the money" stage requires you to strike an optimal balance between patience and aggression, and especially rewards those players who are able to "shift gears" back and forth quickly — even from one hand to the next — as they recognize the changing conditions of their table and the tournament as a whole.

Ready to take a seat at the table? Put these multi-table tournament tips into practice at 888poker.

Surviving at the Lower Stakes and Moving Beyond Them