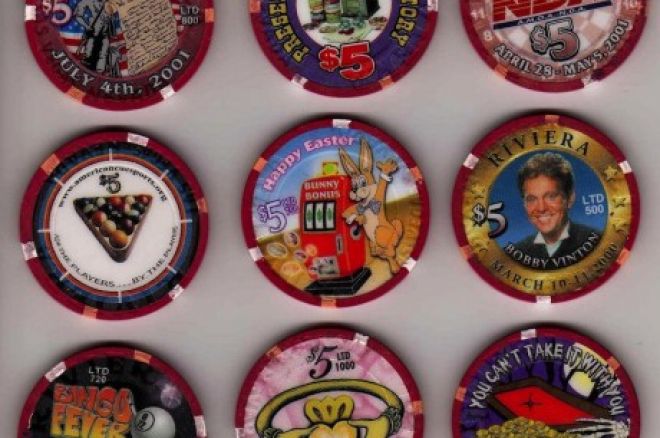 This article concludes my three-part survey of the rules and procedures surrounding poker chips in brick-and-mortar casinos. In the first part, I discussed the complicated relationship between chips and money, chip colors, stacking chips, and other rules regarding chips. In the second part, I covered some things to think about when calling, betting, or raising with chips.

Today I want to finish the discussion by considering a variety of other chip-related topics. All of the following points apply equally to tournaments and cash games.

It often happens that you want to call a bet but don’t have a combination of chips that will match it exactly. For example, you want to limp in by just calling the amount of the $2 big blind, but you have only $5 chips. If you say nothing and just put out one red chip, it’s not clear whether your intention is to just call (expecting the dealer to give you $3 in change) or to raise to a $5 bet.

The “oversize chip rule” (a.k.a. the “one chip rule”) resolves this ambiguity in advance by declaring that a single chip larger than needed to constitute a call is nevertheless deemed to be just a call unless you have verbally announced a raise before putting the chip out.

Note that this isn’t an issue when the overage is not enough to constitute a raise anyway, e.g., if you call a $4 bet with a $5 chip. The rule is also not invoked when you put out more than one chip. For example, if you are facing a bet of $15 and put out two green ($25) chips, nobody could mistakenly think that you intended to just call. Where there is no ambiguity, there is no need for a rule to resolve it.

Once in a while, a player new to casino poker believes that this rule should not be applied if he has small-denomination chips such that he could have used them if his intention were to call rather than raise. For example, he puts out a $5 as the first player to act after the blinds in a $1-$2 no-limit game. When the dealer, following the rule, declares this to be just a $2 call, the player might protest, pointing to the large stack of $1 chips that he could have used if he had wanted to just call.

This argument is never considered valid. The rule goes by what was actually done, not by what could have been done.

I’m not a germophobe, but I do try to keep an awareness of which objects in my environment are reasonably clean and which are not. Casino chips, to put it bluntly, are filthy.

Back in 2007, BLUFF hired a microbiology lab to analyze what bacteria could be found on poker chips from Vegas casinos. The results might turn your stomach. I prefer handling chips as little as possible, and advise you to do the same. Nobody knows for sure, but it stands to reason that poker chips could serve as a vector for transmitting cold and flu viruses from one player to the entire table. I, for one, would like to minimize the risk of being on the receiving end of such a “gift.”

You will often see poker veterans playing with their chips in interesting ways. They will shuffle chip stacks one-handed, run them over their knuckles, flip them like tiddlywinks, bounce them perfectly onto a target, and so on.

Though I can appreciate the time and effort it takes to master such tricks, I have no interest in learning to do them myself, and my advice to you is not to waste your time and energy, either. It’s a distraction from what you should be paying attention to. Also, you may unconsciously give off “tells” this way. Chip-shuffling players are notorious for slowing down — without being aware of it — when they have a monster hand.

Finally, if you spend much time in a large poker tournament room, the “white noise” of hundreds of players mindlessly shuffling their chips may remind you of cicada season and make you want to vow not to contribute to the din.

When playing a in a $1/$2 game, I like keeping at least five or ten $1 chips in my stack at all times. That way, I can bet any exact amount I want to without having to make a verbal announcement of the amount, or call another player’s bet without forcing the dealer to make change for me in the middle of a hand. The reason for that is just that I don’t want to be distracted by such details when I’m trying to focus on what my opponents are doing and making my best decisions.

If I have less than five or ten small chips, I’ll rebuild my supply by paying a couple of round of blinds with larger chips and getting change from the dealer. This, of course, isn’t a rule or even a standard practice or point of etiquette — just a practical hint that you might find helpful.

Sometimes another player or even the dealer will ask you to make change — e.g., exchange five $1 chips for one $5 chip, or whatever. Helping out this way when asked is not only perfectly acceptable, but a nice bit of social lubrication to keep the game friendly and moving efficiently. Just be sure that you count both the chips you’re giving and those you’re receiving, so that both parties concur that the trade is being done fairly.

Particularly when doing an exchange with another player, be as open as you can be about the counting of chips, both verbally and visually. That way, neither the other players nor casino security personnel observing the game through overhead cameras are given any reason to think that unethical “chip dumping” is taking place.

Many players like to keep poker chips as souvenirs of their visit to a casino. Not only is this legal, but the casinos love it when you do this.

When they put into circulation chips with colorful designs commemorating this, that, and the other thing, they earnestly hope that you will take the chips home without cashing them out, resulting in pure profit to the casino. It’s the same principle as the post office printing stamps that they hope you will purchase, then place in an album rather than on an envelope, giving them revenue without having to provide a service in exchange.

If you like collecting chips, feel free to do so. It can be fun to see how many different ones you can accumulate. Be aware, however, that, like most collecting hobbies, it can suck you in and drain your bank account if you let it get out of control.

Whew! Three whole articles just about poker chips! I hope it has been a worthwhile excursion into a subject that isn’t discussed much, but is actually central to how casino poker games operate.

Next we will move on to tackle another category of poker table equipment, also sometimes confusing to the new player — all of the many forms of “buttons” that are used.