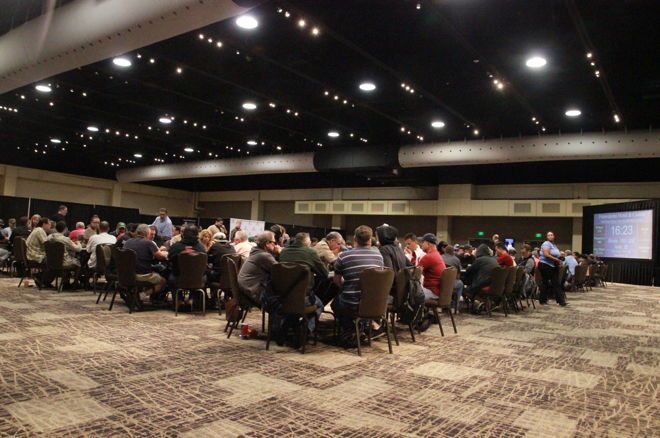 At the beginning of February, I had the opportunity to take a few days off and travel to Wisconsin to play World Series of Poker Circuit Potawatomi, primarily focused on the $1,125 No-Limit Hold'em and $1,700 Main Event. In the former, I found myself regretting turn/river combo play that cost me a good chunk of chips.

Here, I faced off against two-time Circuit ring winner Nic Ditrapani, against whom I have a decent amount of history, having played a Circuit final table against him several years back. He perceives me as very aggressive and capable of running large bluffs and tends to use a fair amount of pot control with his one-pair hands. We both had pretty good stacks around 100,000.

and I checked. Ditrapani bet 4,500 and I called. The turn was an

and we both checked, bringing a

on the river. I bet 22,500 and Ditrapani called fairly quickly, winning the showdown with

This hand is an example of how turn and river play should often be thought of as two connected steps rather than separate streets to be played individually.

Here, I made a standard defend that I wasn't all that excited about with king-jack, considering I don't think my opponent is opening too many hands weaker than this from under the gun. Still, given the price, it's a no-brainer defend, and I got a mixed bag on the flop. On the one hand, I was beating medium pairs, but on the other hand, this is a strong flop for my opponent's under-the-gun opening range. Sure enough, he bet a little under half the pot, and I made a standard call.

The turn is where things get interesting as a diamond hits and I have the nut diamond in my hand. I opted to check, but I think this is a mistake against many opponents, who will reflexively check this card with their top pair hands. Rightfully so in most cases as the big blind usually has a variety of flushes in their range here, while under the gun is more weighted towards pairs and two pair.

I think mixing in some leads with flushes and bluffs in this spot is very good, as with the former you block them from getting to showdown more cheaply and force them to call two sizable bets, and with the latter, you are putting a ton of pressure on their one-pair hands that could be drawing dead. Even against most of Ditrapani's strong hands here, I have plenty of equity with my combo draw to all nut outs.

On the brick river, I decided to turn my hand into a bluff, thinking that I was likely losing a showdown to a hand with an ace in it. Unfortunately, I think when I check the turn here I have to follow up with a river check and hope to show down the winner or possibly check-raise bluff. I thought I could possibly get a fold out of a pair of aces on the end by potting it, but it's just not putting enough pressure on him here when he only has to call one bet, even a pot-sized one.

Rather, the way to attack those hands would have been a sizable turn bet followed by a sizable river bet. Geometric sizing with something close to pot on both streets would have left even strong hands like ace-king in a tough spot. I think he may have found a fold with

here facing serious, potentially all-in aggression – something like 20,000 on the turn would leave me with not much more than pot on the river, giving me a credible shove.

I just didn't have a clear enough decision tree here where bet turn should have led to bet river, but when I did check turn, I should have checked river as well. It cost me 22,500 as I tried a belated bluff that just wasn't going to work against most of his likely hands.