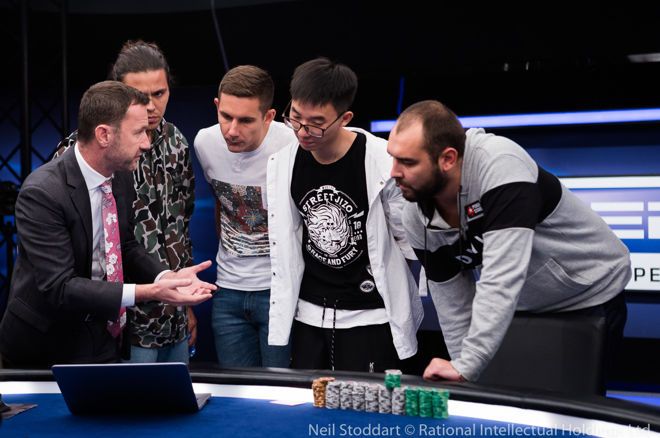 My last article, "To Chop or Not to Chop? Explaining Standard Deal-Making Methods," explained differences between final-table deals in tournaments — the equal chop, the chip chop, and the ICM chop. After having analyzed these standard deal-making methods used in most card rooms around the world, it is time to decide which deal is best for us.

As a reminder, last time when discussing the different chops were imagining a three-person deal. Here were the scheduled payouts and what the chip stacks were at the time of the deal:

And here is how the payouts would work for each of the three standard deal-making methods:

All else being equal (including skill), the ICM-based chop seems to be the most fair as it properly weighs each player's chances of being awarded each prize.

With those differences in mind, there are four fundamental questions players should be asking themselves in order to influence an outcome in a way that best suits their particular situation.

The answer to this question is not as obvious as you may think. Some people argue passionately that you should try to make a deal no matter what. Their main point is that getting a fair amount now is always better than risking getting less later. These are the same people who if someone offered them a $100 bill or the opportunity to flip a coin for $200 if they win and $0 if they lose, they would always take the $100.

Although the above argument is mathematically sound, it does not take into account that for some there is entertainment utility in taking the gamble and/or going for the trophy, something that could push the expected value of the second option above $100. This is especially true for wealthy individuals or those with an above average "disregard" for money.

Whatever the reason may be, it is up to each individual to decide whether the enjoyment of the game is worth more than the risk being taken by not securing a fair share of the remaining prize pool via a deal.

Question #2 (How?): How can I make an honest assessment of the situation?

Say we had our fun making a deep run. However, the money is important to us and thus we are ready to make a deal! That being said, it will be very difficult to reach a fair consensus if we undervalue or — as happens in the majority of the cases — overvalue our poker skill.

It is therefore really important to set our ego aside and make an honest assessment of how good our gameplay is relatively to the other players. (A rough estimate should be more than enough.)

For those unsure about their relative skill, here are some guidelines to keep in mind. Naturally, the more times a player has been in a similar situation before, the more likely that player's skill is above average. Conversely, if this is a player's first time making a deep run, chances are that player is at a skill disadvantage against the field.

Another heuristic would be a direct comparisons between each of the remaining players looking for sufficient evidence supporting skill superiority. For example, Alice could conclude things like the following about Bob:

Alice may also admit a skill deficit against another player with observations like:

Incidentally, it may seem ironic but it does take a significant amount of skill for a person to be able to realize his or her own skill deficit. For more on this topic, study up on something called the "Dunning-Kruger effect" and learn how it can easily cloud how people their own true poker abilities.

A good rule of thumb to help overcome this issue is to set a much higher standard for yourself before declaring "skill victory." When players cannot clearly and concisely articulate multiple areas of skill superiority, chances are they are not as skillful as they think. Like Alice above, the burden is on her to provide adequate evidence of her abilities.

Some of you may be wondering: Why bother quantifying skill? The answer is very simple. Skill differences affect the outcome of the game and thus the exact amount of each "fair" share of the deal.

For instance, consider the following hypothetical situation. We convince Alice, Bob, and Charlie to play out their current stacks 100 different times, each time recording their winnings. This means that Alice may win the first time, Charlie the second time, Alice again the third time, and so on. Say that by the end of the 100th tournament, their total winnings appear as follows:

The evidence is clear. Here our sample size is large enough to indicate that Bob is likely at a significant skill disadvantage versus the other two. Charlie started with a smaller stack and yet he made more money than Bob in the end. On top of that, Bob's average payout ended up being $100 below what ICM-based chop suggested, while both Alice and Charlie scored a combined $100 above it.

In other words, Bob paid an extra $100 of his expected ICM prize money to Alice and Charlie. This is not surprising as the ICM does not take into account skill differentials.

The lesson is also clear. Had Bob been aware of his skill deficit (and the effect it has on his profitability), he could have taken it into account while discussing the deal. For instance, he could have proposed a chip chop or any other deal that would guarantee him an amount of around $400-$450. That figure may still be below his ICM prediction, but it is still far above what he would get in reality.

Question #3 (What?): What is my expected premium/discount?

First of all, let's clarify what we are asking about here. The "expected premium/discount" is simply the difference between one's long run (expected) average minus the ICM prediction. For instance, in the above example:

Clearly, this is a very difficult question to answer precisely, as we do not have the luxury to run a tournament multiple times under identical conditions (like we did in the hypothetical setting above). That being said, we do know that poker is a game of skill, so we do know that premiums (and discounts) do exist!

The shallower the game (i.e., fewer big blinds in play), the less these two factors matter. That's because when blinds get too big relative to the stack sizes, people are forced to gamble, eliminating any room for maneuverability and skill. These two factors are also correlated and often hard to distinguish, so it makes sense to look at them holistically as the skill-stack premium.

As we alluded to earlier, none of these premiums are considered during the ICM calculations, mostly because they are rather vague by nature. Instead they are implied by the final deal.

As open-ended and difficult to quantify these premiums are, they are very much real, and thus it is absolutely necessary at least to consider them before making a deal.

Question #4 (Who?): Who am I dealing with and what do they want?

The key to most successful negotiations is information. Knowing what people want (and if possible why they want it) can help us determine whether or not we can accommodate them and to what extent.

For example, say that a player wants to play for the trophy. If this is all the player wants (or the most important thing to the player), an opponent can suggest a monetary deal separately from the trophy. That way players can split the money in any way to see fit and also get to play to see who finishes first.

As another example, say Bob knows that Charlie is by far the best player at the table and also wants second-place money for his efforts. That is, Charlie wants $400. Although this may seem like a lot (Charlie is the short stack after all), a closer inspection reveals that Charlie significantly undervalues his premium. His request may be close to what ICM suggests ($397) but that does not necessarily make it "fair." In actuality, Charlie is selling himself short as he did not price in his massive skill advantage.

As a result, Bob is presented with a great opportunity, despite the fact that he is the least experienced player at the table. If he can convince Alice to get something around her ICM share, he can go home with far more money than he was expected to make in reality. Sure enough, Alice asks for $650 because of her stack (that is she asks $32 above her ICM). Bob happily accepts to pay Alice's premium from his own share and the final distribution of prizes reads as follows:

If we compare these number to what would have happened in reality, we see that the only one who benefited from the deal is Bob. The other two players would have made more had they played it out.

The primary lesson here is that one need not be the best poker player in order to make great deal!

Konstantinos "Duncan" Palamourdas is a math professor who specializes in the mathematics of poker. When not at the poker tables, Duncan can be found teaching poker classes at UCLA extension to people of all levels. His passion for simplifying complex poker concepts has also led to a poker book, contracted to be published by 2020. You can follow Duncan on Twitter @AskTheMathDr.

To Chop or Not to Chop? Explaining Standard Deal-Making Methods