The 2012 Aussie Millions $250,000 Super High Roller has concluded and lasted into the early hours of the morning on Sunday. As the sun started to rise in beautiful Melbourne, Australia, one of the greatest poker players the world has seen, Phil Ivey, shipped the A$2,000,000 first-place prize after defeating Patrik Antonius heads up and officially welcomed himself back into the poker world as if he had never left.

It was just a handful of months ago that Ivey disappeared from live tournament poker before returning in November at the APPT Macau. He didn't cash there, but here at the Aussie Millions, Ivey made a couple of really big splashes. First, he placed 12th in the Main Event for A$100,000 and then went on to ship the largest score of his career by winning the Super High Roller.

The event attracted 16 players, all of whom ponied up the massive six-figure buy-in to take part in the event. The top three spots were set to pay out and a bubble of A$800,000 was in store.

Of those who played in the event were last year's champion Erik Seidel, last year's runner-up Sam Trickett, Tom Dwan, Jason Mercier, John Juanda and Sorel Mizzi. Along with those professionals, the event had a handful of businessmen on the felt, including Richard Yong, Paul Phua and Winfred Yu.

The first player eliminated on the day was Dwan and he fell at the hands of Gus Hansen. Next to go was Nick Wong. The defending champion Seidel busted during Level 5 with the blinds at 3,000/6,000/500. He was shipped out the door by $100,000 Challenge winner Dan Smith after his pocket eights couldn't overcome Smith's jacks.

After Yu bowed out in sixth place and Mizzi in fifth, the largest bubble of the year was set to take place.The two players that joined Ivey and Antonius were Daniel Negreanu and Gus Hansen. From that group, the only man not getting a huge chunk of cash was Negreanu as he turned out to be the bubble boy.

On his final hand, Negreanu was all in from the big blind with the

and was able to hold up as the board ran out

Falling in third place was Hansen when he was eliminated by Ivey. Hansen took home A$800,000 for his finish after getting all in on the

. The turn was the

to finish things off.

When heads-up play began, Ivey held the slight lead with 2.2 million in chips to Antonius' 1.8 million. He won a big pot about 45 minutes into the match to extend his lead to seven-to-one before the final hand came up.

Antonius moved all in with the

from the button and Ivey made the call with the

flop put Antonius in front, the

on the turn catapulted Ivey back into the lead. He held from there as the

landed on the river and Antonius was eliminated in second place. For his runner-up finish, Antonius scooped A$1,200,000.

With his win, Ivey leaps over Negreanu and into second place on the all-time money list. He also further secures his position in poker history as, what many consider, the greatest player on Earth. Even with his absence from tournament poker for so long, Ivey took to the Aussie Millions with a vengeance and has put himself right back on top. 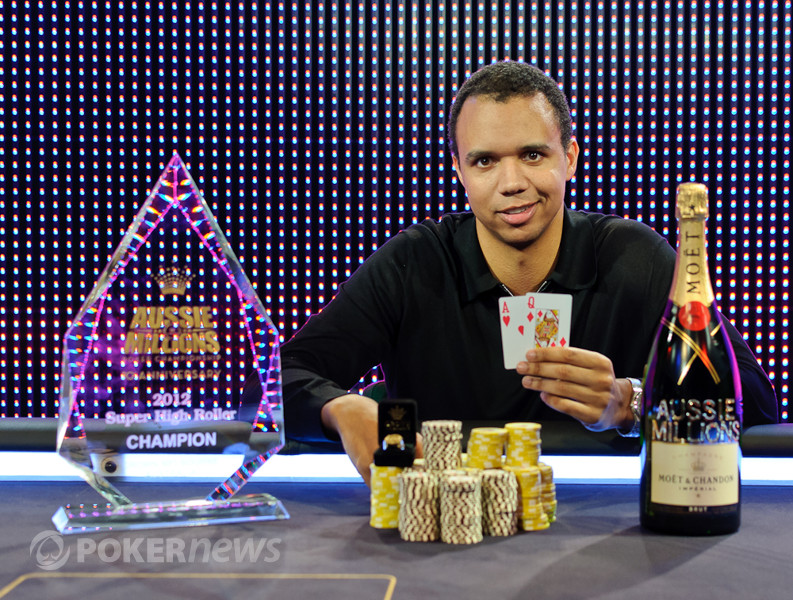 The PokerNews Live Reporting Team will be on hand for the final day of the 2012 Aussie Millions Main Event tomorrow.