No Freeroll For Weisner

Well, it was a good effort. With black-and-blue shins and her tail slightly between her legs, Melanie Weisner has returned to the tournament to play her stack. She's in on her own dime.

After about 36 hours of practicing, Weisner wasn't quite able to fulfill Tony G's requirements for a freeroll, though she gave it a pretty admirable effort. As a consolation prize, Tony G has offered to repay her unicycle lessons from the circus nuts, and he's also on the hook for a very expensive dinner in Los Angeles the next time they're both on the West Coast.

As we walked over to check on her, Weisner was involved in a pot. She opened with a raise of two purple chips, though she may have announced a smaller amount than the 1,000 she had out there. Regardless, the gentleman in the small blind three-bet to 2,500, and Weisner called for a flop. It brought

and another bet of 2,500 from the small blind, and Weisner matched it again. She couldn't call a turn bet, though, folding to 7,500 on the

Thanks to our pal Arthur Crowson for this photo of the action upstairs (Weisner far left, Tony G far right): 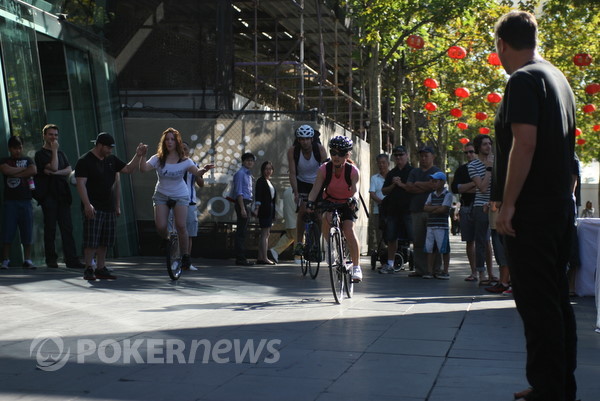