ElkY Out on Bubble

Tsoukernik eliminated his arch nemesis Charlie Carrel heads up to be crowned champion and received a check worth €741,100.

After Bertrand "ElkY" Grospellier bubbled the event late on Day 2, play continued until Anthony Zinno went out in seventh place for €123,520. As a result, six players returned to the table on the final day of play.

Chips were anything but evenly divided among the six finalists. Tsoukernik and Carrel were leading, Juha Helppi and Viacheslav Buldygin found themselves in the middle of the pack and Paul Newey and Julian Thomas dangled on the bottom. While plenty happened, with big pots, huge coolers and some great table talk, the players would eventually all go out in the order they started in.

Carrel took the lead early on, bluffing Tsoukernik off his flush in a big pot. While the two big stacks changed position, nothing really changed for Thomas. The 2013 WPT Prague champion remained short and wouldn't find his much-needed double. He eventually fell to Carrel, receiving €152,915 for sixth place and leaving Carrel behind, even stronger than before.

Newey, who finished runner-up in this event back in 2014, was the next with his head on the chopping block. He played his own conservative style and it took a bad beat to send him packing. He got it in before the flop with tens against the eights of Buldygin with one eight already folded. The sole eight would not appear on the board. Instead, Newey saw his Russian opponent make a straight on the river. Newey, who came from an incredible run in Macau that saw him make back-to-back final tables last month (a high roller and a super high roller), went out in fifth for €200,000.

The next hand following Newey's departure was probably the most important hand of the final table. Carrel and Tsoukernik squared off in a huge pot that took a good 10 minutes to complete. Tsoukernik, who had already shown on Day 1 he was keen on playing the good old

and had advertised his love for the worst starting hand in poker earlier on the final table as well, made a straight with it on the river. It was bad luck for Carrel who had two-pair by that time and, after studying his opponent for over eight minutes, couldn't get away with it.

That hand saw Carrel fall back to the role of small stack while Tsoukernik really distanced himself from the competition. Carrel admitted, in a joking fashion, that runner-up was now the only obtainable goal for him, winning was no longer realistic with such a huge lead for Tsoukernik, he said.

It took quite some time before the next player was heading for the rail. Helppi got extremely short only to find some doubles to get back in it. Eventually, Buldygin, the somewhat mysterious Russian player that blasted onto the scene in Malta with two runner-up finishes in expensive events, was the one departing in fourth position. He got it in with jack-nine suited against jacks and packed his things after the board blanked out.

Helppi, fresh off a fourth-place finish in the Master Classics of Poker Amsterdam Main Event last month, ended up going out in third place. Down to just a couple of big blinds, he ran ten-seven suited into jack-ten suited of Tsoukernik and received €341,150 for his troubles. This is the second biggest score of his 15-year long career; he's now only $232,553 short of overtaking Patrik Antonius as Finland's all-time money leader.

That left Carrel and Tsoukernik heads up, the mano-a-mano match that seemed meant to be. From the start of the tournament two days ago, the two had battled with each other. At one point on the first day of play, the discussion between the two had heated up a little. That argument was soon settled and the two were friendly, though extremely competitive and fierce.

Tsoukernik, who had splashed around several one-liners all day, only upped his talking game.

"I'm the only pro, the rest is semi-pro at best" was one of his witticisms, only outdone by his cryptic, "All rivers lead to the sea."

Carrel had his big smile out just about constantly and seemed to enjoy the battle with his Czech opponent. Carrel, usually the most talkative person at the table, had found his match.

While one could argue that Carrel had more experience playing heads-up tournament poker, Tsoukernik was at ease. He repeated that the money was no issue to him and that he was playing for fun.

Carrel started out a three-to-one dog and would never get any traction heads up. Instead, he lost some medium-sized pots to get real short and entered a stage where his stack size dictated folding or shoving. He chose the latter with ace-king and got it in good against the king-jack suited of Tsoukernik. The flop, however, came jack-high with two of Tsoukernik's suit, leaving him drawing extremely slim. Blanks on the turn and river resulted in exactly that; Carrel had to leave the first place to Tsoukernik.

Leon Tsoukernik, the Czar of Rozvadov, ruled in Prague. He dominated just about from start to finish and ended the event in style.

We can only hope that the rest of the final tables of this last ever European Poker Tour will be as fun and interesting as the one on display this afternoon. And otherwise, we're sure Tsoukernik will bring just as much entertainment to all of the events of the PokerStars Festival he hosts in his King's Casino in Rozvadov March 2 through March 13.

Hand 127: Charlie Carrel open-shoved for his last 1,270,000 from the small blind and Leon Tsoukernik peeked at his cards, then called.

"He has ace-king..." Tsoukernik said to his Czech rail, and asked for spades next.

The dealer brought a magic flop of

. Carrel was drawing very thin all of a sudden and joined the rail after the

The players shook hands with Carrel still having a smile on his face before leaving the spotlight to Tsoukernik. The Brit missed out on scooping a third EPT High Roller title and took home €535,250 for his efforts.

A recap of today's action will be available shortly.

in the small blind to give Charlie Carrel a walk with

Hand 119: Carrel limped in with the

with the words "let's see the flop, I love the flop." Tsoukernik checked the flop of

and Carrel's bet scooped the pot.

raised it up and Charlie Carrel called with

on the flop and Carrel check-folded to a bet by Tsoukernik.

Hand 123: Charlie Carrel limped in with the

Hand 124: Leon Tsoukernik limped in with

and folded to Charlie Carrel's push with

Hand 125: Charlie Carrel limped in with

on the button. Again, Carrel had a huge hand with

and again didn't win much with it.

Tsoukernik did a small victory dance not getting involved.

Hand 113: Charlie Carrel limped in with

Hand 114: Tsoukernik folded his button, giving Carrel a walk with

Hand 116: Leon Tsoukernik with the

Hand 117: On the button, Charlie Carrel with the

Hand 106: Leon Tsoukernik limped in with the

and Charlie Carrel just checked his

in the big blind. The flop of

fell on the river and Carrel checked, Tsoukernik bet 375,000 and was snap-called to get shown trips.

Hand 107: Carrel limped in with the

and Tsoukernik checked his option with

, Tsoukernik checked and folded to a bet worth 135,000 by Carrel. Martin Kabrhel on the rail briefly sent some words in Czech to Tsoukernik after the hand was over.

Hand 109: Carrel folded and Tsoukernik got a walk with

in the big blind.

and Carrel defended the

on the turn saw Carrel check-call another bet worth 500,000 and the

on the river then went check, check. The cards were turned over and Carrel was left with just 10 big blinds.

on the button. Carrel called with

and Carrel check-folded to Tsoukernik's bet.

Hand 101: Carrel limped from the button with

and Carrel moved in for 2,720,000 instantly. Tsoukernik asked for a count, tanked for a fair bit, and folded.

"Nice pot" Tsoukernik said, "This one I'm interested to see"

Carrel instantly told him he had pocket fours.

Hand 103: Carrel limped in with

and both players checked. The

, Carrel received a walk while he had

Hand 105: Carrel limped in with

The two players are back in their seats and the action has recommenced. Leon Tsoukernik starts the heads up with a 3-1 lead over Charlie Carrel. 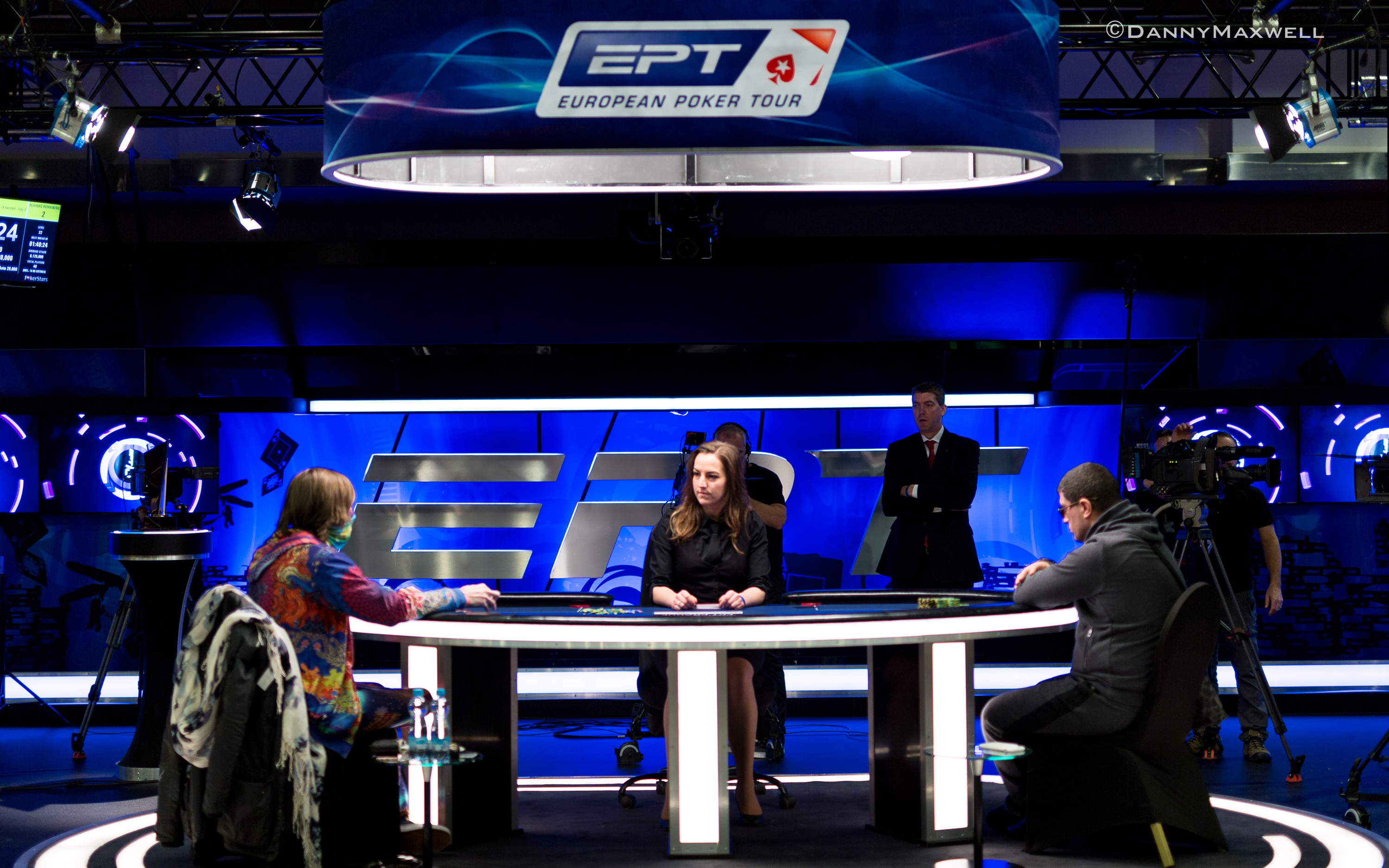 Hand 99: Juha Helppi shoved the small blind for 675,000 and Leon Tsoukernik first adjusted his big blind, then quickly called the all in of the Finn.

and Helppi found no help to join the rail in 3rd place. He earned €341,150 for his efforts and took over the first place in Finland's all-time money list.

"I think the show was made for us," Tsoukernik said and Charlie Carrel replied "since Day 1" when both clashed several times at the same table. The players have been sent into a short break to set up the final duel for the last EPT Super High Roller title.

Hand 98: In the first hand back from the break, Leon Tsoukernik raised to 350,000 with the

on the button. Juha Helppi had the

in the big blind and folded after plenty of consideration.